BNP asks aspirants to work together 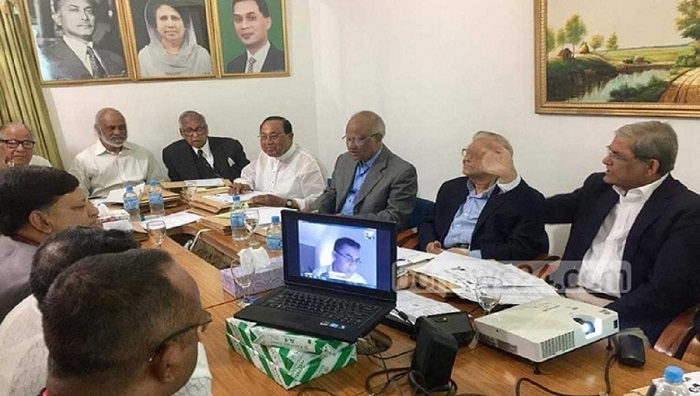 The BNP nomination board on Monday gave strong messages to its nomination seekers to stay united and refrain from intra-party conflicts and violence as the party wants to return to power through a credible and peaceful general election.

After facing the interview by the BNP nomination board, a number of aspirants said they were also instructed to get ready to resist any kind of vote fraud with their united efforts.

The nomination board also asked the party hopefuls to work for the candidates of their alliance partners with the same spirit and provide them all-out cooperation in the greater interest of the party and have their chairperson Khaleda Zia freed from jail.

The aspirants said they assured the board of staying away from infighting and working together with a formidable spirit so that all the candidates of the ‘Sheaf of Paddy’, the BNP’s election symbol, can come out successful.

Sabira Sultana, a nomination seeker from Jashore-2 constituency, said, “Our acting chairman first described the situation under which we’re joining the election. Then, he asked us to remain united, not to engage in any internal conflict, and work for the candidate whoever gets the party nomination. We’ve assured him and the party standing committee members that we’ll abide by their decisions come what may.”

She said the nomination board also asked them to stay alert and not to respond to any provocative act by any quarter, and stay away from violence. “But we’re instructed to resist any move to rig votes and capture polling stations.”

Mohammad Musa, who wants to contest the election from Jashore-5, said, “Our leaders said we must abide by any decision on the party nomination as it’s a very critical time for the party. We assured our leaders that we’ll work together, no matter who is getting nomination, to ensure the party’s victory.”

Maksudul Hasan Khan, a nomination hopeful from Chuadanga-2, said they were instructed to work for the party in the election rising above personal interest and misunderstanding and conflicts among them. “We’re also directed to get ready from now on so that our opponents can’t indulge in vote rigging and irregularities.”

He said they are given directives to remain vigilant so that the ruling party cannot shift the blame on them by carrying out any violent act. “We all promised that we won’t violate any party decision and involve in any conflict and violence.”

Iftekhar Alam Agni, a nomination seeker from Jashore 1, said they assured the party high-ups that they will not harm the party unity for their personal interest, and work for the victory of the ‘Sheaf of Paddy’ to take the party to power and free their chairperson Khaleda Zia.

Aninda Islam Amit, son of party’s late standing committee member Tariqul Islam and a nomination hopeful from Jashore-3 seat, said, “Our acting chairman told us that the party and the country are now in a crisis and democracy is regulated. Our unity can help us get rid of it.”

Syed Moazzem Hossain Alal, party joint secretary general and a spirant from Barishal-5, said Tarique told them that all the nomination seekers have more or less sacrifices for the party as well as contributions to it.

“There’re many competent candidates. We’ve to select one in each constituency. We also have to share seats with our friends from our alliances. So, all must accept the party decision whatever it may be,” he quoted their acting chairman as telling them.

Abu Naser Rahmat Ullah, also the nomination seeker from Barishal-5, said they were directed to remain united and work hard for the ‘Sheaf of Paddy instead of thinking about any person or candidate.

Saidul Alam Milon, a nomination seeker from Bhola-3, said they assured their party high command that they will refrain from intra-party conflicts and violence and put in their best efforts to check vote rigging so that the party can win the polls.

Despite objection from the ruling Awami League, BNP acting chairman Tarique Rahman joined the nomination board through videoconferencing and interviewed party nomination hopefuls for the second day on Monday.

The party nomination board, comprising BNP standing committee members, started the interview with those who bought party nomination forms for Barishal division at BNP chairperson’s Gulshan office at 10 am. Later, they interviewed the aspirants under the Khulna division.

BNP secretary general Fakhrul Islam Alamgir said they took the interviews of 183 nomination seekers of their party under Barishal division in the morning.

Fakhrul said their party is united and all will work for the candidates the party will nominate. “We’ve taken part in the election as part of our movement, and we know the results of the election will determine the future of Bangladesh’s democracy.”

He said they will consider the loyalty towards the party and devotion for democracy as the main criteria in selecting its candidates.