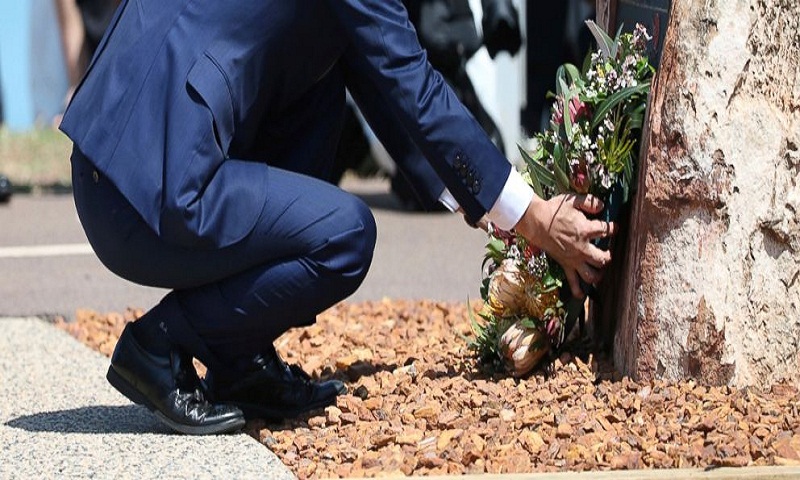 Japanese Prime Minister Shinzo Abe on Saturday visited a shrine in Darwin commemorating the deaths of 80 Japanese submariners in waters near the city in World War II.

Abe arrived in Darwin on Friday for meetings with Australian counterpart Scott Morrison, becoming the first leader of Japan to visit the northern port city since it was bombed by Japanese forces in 1942.

After laying a wreath with Morrison to remember the 240 people estimated to have died in the Darwin bombings, Abe on Saturday honored servicemen from his own country killed in a lesser-known incident.

Japanese submarine I-124 was sunk with depth charges deployed from an Australian ship, the Deloraine, after a battle on Jan. 20, 1942. The sub had been one of four from Japan laying mines in the area to attack allied shipping along the northern coast of Australia.

The I-124 sank with all 80 crew members on board, and remains on the seabed some 60 miles (90 kilometers) northwest of Darwin. The city was bombed by Japanese forces a month later.

During a solemn ceremony at the coastal memorial, Abe, accompanied by wife Akie, laid a wreath, as did Michael Gunner, the chief minister of the Northern Territory, of which Darwin is the capital.

The visit continued Abe's moves to show remorse for Japan's role in the war, following his trip to Pearl Harbor in 2016.

Earlier Saturday, Abe toured a Japanese coast guard that docked in Darwin to coincide with his visit. Abe and Morrison on Friday announced an agreement to strengthen bilateral cooperation on maritime security.

Speaking with officers on the vessel, Abe said "the seas are the highways through which Japan imports vital resources."

"These seas, including the waters surrounding Australia, are extremely important to us as they contain the very lifelines of maritime transport," he said.

Morrison and Abe also agreed to increase defense cooperation, with Abe saying he hoped a deal might be agreed early next year.