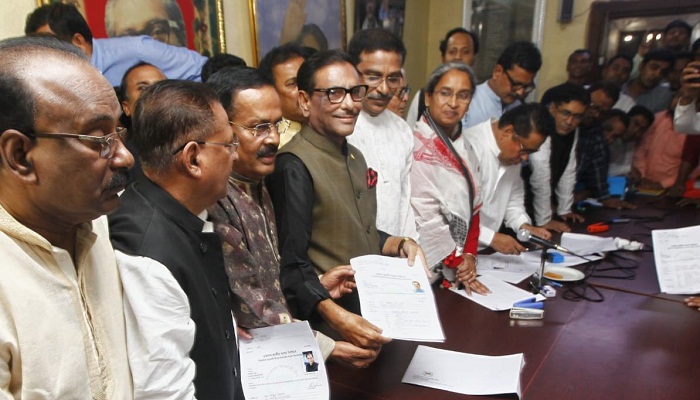 The interview of those who have collected nomination papers to contest the forthcoming general election with Awami League tickets will be held on Wednesday.

Awami League Parliamentary Board (ALPB) will interview the aspirants from 11am at party President Sheikh Hasina’s Dhanmondi political office.

ALPB President Sheikh Hasina will preside over the interview session.

Staff members at the AL chief’s political office were passing a busy time in sorting out the nomination papers submitted by the party aspirants.

A total of 4,023 party leaders collected nominations forms to contest the election with AL tickets.

The party fund has been credited with more than Tk 12 crore from the sale of nomination forms, he added.

Many aspirants were also seen submitting their nomination forms on Tuesday as the deadline was extended till 6pm.

On Friday, the ruling Awami League started selling nomination forms after the Election Commission announced the schedule for the 11th national election on Thursday.

However, Chief Election Commissioner (CEC) KM Nurul Huda on Monday announced a fresh reschedule for the 11th parliamentary elections saying the polls will be held on December 30 instead of December 23.

The last date for submission of nomination papers is November 28 instead of November 19, he added.