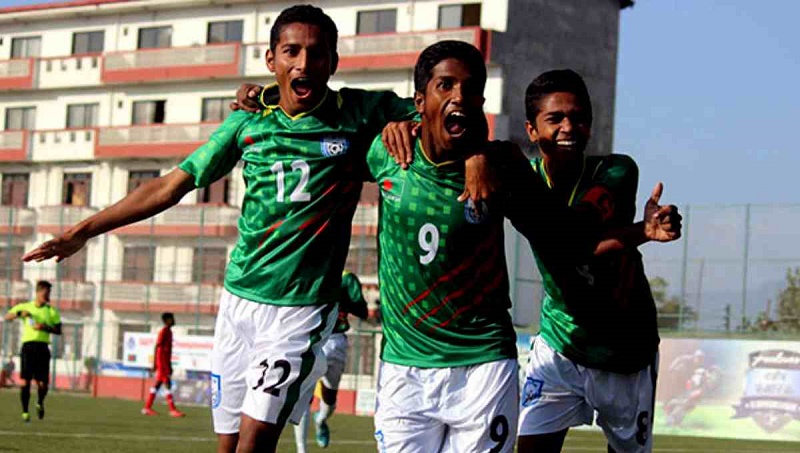 Bangladesh smartly reached the final of the six-nation SAFF U-15 Championship with all-win record eliminating neighbour India by 4-2 goals in tie-breaker at ANFA Complex in Lalitpur, Nepal Thursday morning.

Earlier, the first semifinal match between two teams was locked in 1-1 goals in the stipulated period.

Bangladesh will play final on Saturday (Nov 3) at 2:45 pm (Bangladesh time) against the winners of Pakistan and Nepal, who will meet each other in the 2nd semifinal Thursday afternoon.

Bangladesh qualified for the final of the SAFF U-15 Championship for the first time after losing to hosts Nepal in the semifinal in 2017.

However, Bangladesh emerged champions in the SAFF U-16 Championship held in Sylhet in 015.

In the day’s crucial first semifinal, Patre Harsh Shailesh put India ahead in the 17th minute by a long distance shot about 35 yards, amid huge celebration of Indian players and their fans (1-0).

When the match was almost heading for Indian victory, then tournament’s leading scorer Nihad Jaman Ucchash scored the match equalizer in the 3rd minute of the stoppage time from a penalty (1-1) leading the match towards tie breaker.

With the day’s goal, Nihad Jaman of Bangladesh further consolidated his position in the scorer list making five goals.

Earlier, Bangladesh emerged Group A champions with all-win record to reach the semifinals beating hosts Nepal by 2-1 goals in the last group match after crushing the Maldives by 9-0 goals in the first match, featuring a hat-trick by Nihad Jaman while Nepal outplayed the Maldives 4-0 in their first appearance on Thursday last.