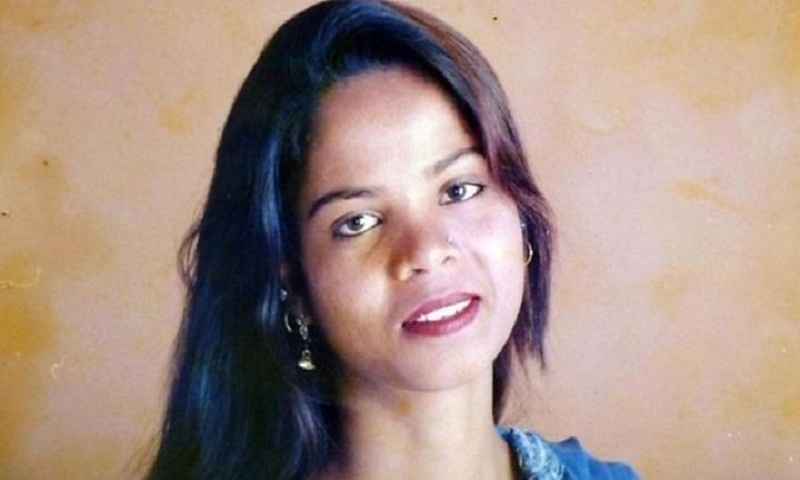 Pakistan's Prime Minister Imran Khan has attacked hardliners and appealed for calm after the acquittal of a Christian woman convicted of blasphemy.

In a televised broadcast, Mr Khan said hardliners were "inciting [people] for their own political gain", claiming they are "doing no service to Islam".

Her lawyer has told the BBC she would need to move to abroad for her safety.

Asia Bibi was convicted in 2010 after being accused of insulting the Prophet Muhammad in a row with neighbours.

She always maintained her innocence, but has spent most of the past eight years in solitary confinement.

Wednesday's verdict by the Supreme Court triggered demonstrations in Karachi, Lahore, Peshawar and Multan. Clashes with police have been reported.

The Red Zone in the capital Islamabad, where the Supreme Court is located, has been sealed off by police.

Late on Wednesday, Mr Kahn said: "Which government can function like this, blackmailed by protests?...

"And who suffers due to this? Our Pakistanis. The common people, the poor. You block the roads, you rob people's livelihood...

"This is not the service of Islam, this is enmity with the country. Only anti-state elements talk like this, that kill the judges, start a revolt in army... They are only trying to beef up their vote bank."

What was Asia Bibi accused of?

The trial stems from an argument Asia Bibi, whose full name is Asia Noreen, had with a group of women in June 2009.

They were harvesting fruit when a row broke out about a bucket of water. The women said that because she had used a cup, they could no longer touch it, as her faith had made it unclean.

Prosecutors alleged that in the row which followed, the women said Asia Bibi should convert to Islam and that she made offensive comments about the Prophet Muhammad in response.

She was later beaten up at her home, during which her accusers say she confessed to blasphemy. She was arrested after a police investigation.

What is blasphemy in Pakistan?

Laws enacted by the British Raj in 1860 made it a crime to disturb a religious assembly, trespass on burial grounds, insult religious beliefs or intentionally destroy or defile a place or an object of worship, punishable by up to 10 years in jail.

1982 - life imprisonment for "wilful" desecration of the Koran

1986 - "death, or imprisonment for life" for blasphemy against the Prophet Muhammad

What did the Supreme Court say?

The judges said the prosecution had "failed to prove its case beyond reasonable doubt".

The case was based on flimsy evidence, they said, and proper procedures had not been followed. The alleged confession was delivered in front of a crowd "threatening to kill her".

The ruling heavily referenced the Koran and Islamic history. It ended with a quote from the Hadith, the collected sayings of the Prophet Muhammad, which calls for non-Muslims to be treated kindly.

Why is this case so divisive?

Islam is Pakistan's national religion and underpins its legal system. Public support for the strict blasphemy laws is strong.

Hard-line politicians have often backed severe punishments, partly as a way of shoring up their support base.

But critics say the laws have often been used to get revenge after personal disputes, and that convictions are based on thin evidence.

The vast majority of those convicted are Muslims or members of the Ahmadi community, but since the 1990s, scores of Christians have been convicted. They make up just 1.6% of the population.

The Christian community has been targeted by numerous attacks in recent years, leaving many feeling vulnerable to a climate of intolerance.

Since 1990, at least 65 people have reportedly been killed in Pakistan over claims of blasphemy.

Asia Bibi, who was born in 1971 and has four children, was the first woman to be sentenced to death under the laws.

Internationally, her conviction has been widely condemned as a breach of human rights.

Authorities said she is scheduled for release later this week, after which her plans are unknown.

Speaking to the BBC, her lawyer Saiful Mulook said she would need to move to a Western country after the ruling for her own safety.

She has been offered asylum by several countries and many expect her and her family to leave Pakistan.