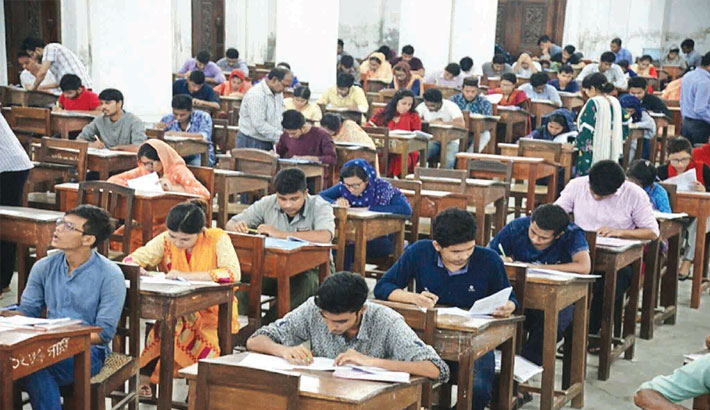 I was taken aback while scheming through a picture on the online media that portrayed over hundred students (both males and females) lying on the floor of a compartment of a passenger train coming from Dhaka to Rajshahi. There was not an inch of vacant place for the seating passengers to go to the washroom. Most of these passengers were students who were coming from different parts of the country to appear at the entrance test at Rajshahi University. It has become a real encumbrance for all the guardians whose children are travelling all over the country to get an entry test at a public university.

Entry tests at the university level have become an issue of stern concern for all students aspiring for an entry at the public universities. The amount of twinge a student is required to take is beyond explanation. The guardians of the students are also required to suffer from different glitches during this period. Their sufferings take severe shape in case of female students as they are required to be accompanied by their guardians wherever they want to sit for an entrance test. Sometimes, the male students could attend the entry test at different universities with their friends. They could stay at different student halls and at different student residents. But, in our societal culture, it is very difficult for a female student to travel alone if she travels over a long distance. Even they need a safe place to stay. That is why the parents usually accompany them when they travel to different parts of the country during entry tests. Even, thousands of male students have to undergo bitter experience when they do not find someone known at different universities. That is why these entry aspirants are required to stay at different public spaces, including, rail station, mosques and alike. Can we imagine the agonies of these candidates?

It also exerts tremendous pressure on the guardians belonging to poor and middle-class families as they are not only required to pay fees for appearing at the entry tests at different universities but also bear expenses for travel, accommodation and lodging. I have come across many students and guardians who had to suffer a lot to manage money for attending entry tests at different universities.

The students are also required to pass through the process of tension and mental pressure that stems from attending many examinations within a short period. The time gap between entry tests among universities is short. For instance, I could cite few examples from this year's entry tests. The entry test at the Military Institute of Science and Technology (MIST) took place on 20th of October while entry tests at the Rajshahi University of Science and Technology (RUET) took place on 21st of October. Entry tests at Rajshahi University took place on 22nd and 23rd of October. Thus, we can easily comprehend how much mental and physical pressure a student is required to tolerate to sit for an entry test at different universities.

Due to the above reasons the entry test has been discussed by all concerned for some years. Even the issue has been in discussion at the government level. Considering the agonies of the candidates and their parents, the President of the People’s Republic of Bangladesh in his speech at several programmes has instructed the vice-chancellors of public universities to consider holding a combined entry test in the country. Unfortunately, nothing has happened yet. As we know that the issue gets discussed in the meeting of the vice-chancellors’ forums every year before the entry of the fresher. But, the vice-chancellors have yet to come up with a comprehensive plan to conduct a combined entry test in the country. Of course, we cannot deny the existence of different challenges associated with the process of accommodating diversified disciplines through a single entrance test.

One may argue that the ministry of health has ensured the entry of medical students at all public and private medical colleges through a single entrance test that takes place all over the country on a specific day. But, we need to remember that only one stream of applications is appearing at the medical entry tests whose question pattern is very similar. But, at the university levels, there are different departments under various faculties and institutes that are referred to as degree offering entity. Each of them has different requirements as these are divided into different groups, including science, commerce, social science, business and so on. Thus, the responsible authorities find it difficult to come up with a unique system through which these matters can be dealt with.

I strongly believe that it is possible to find out a mechanism. For instance, the government could think of conducting a central entry test through the University Grants Commission of Bangladesh or any other department under the Ministry of Education. They could opt to take tests based on the orientation of the students (science, social science, commerce etc). Another alternative could be to hold an entry test through cluster system. For instance, four universities that are administered by the act of 1973 could form one cluster while science and technology universities could form another cluster. Another cluster could be formed with the rest of the universities. Here, it would be easier to conduct and administer the process of an entry test. Whatever system the government may have chosen, they need to consider that the system should be developed to allow the students to appear at the examinations in their respective hometowns. They should not require travelling all over the country. Only then, their agonies would be reduced.

Along with the central and university administration, other stakeholders, including guardians should also play a supportive role in favour of this agenda. Previously, we have experienced that an attempt to hold a combined entry test of Shahajalal University of Science and Technology and Jessore University of Science and Technology could not be materialised due to the strong opposition of the local people. Professor Zafar Iqbal was the pioneer of that initiative. Had the initiative been successful it could have been an eye opener for other public universities. Thus, the support of the students and guardians are looked-for to implement such initiatives. The teachers of public universities should also extend their support to their respective university admission.

Under the above circumstances, the Ministry of Education, UGC and vice-chancellors of different public universities need to sit together to find an amicable solution to this problem. We should bear in mind that these students will be the future leaders of the country. Thus, appropriate initiatives are required to be taken as soon as possible to reduce the agonies of the admission seekers and their guardians.