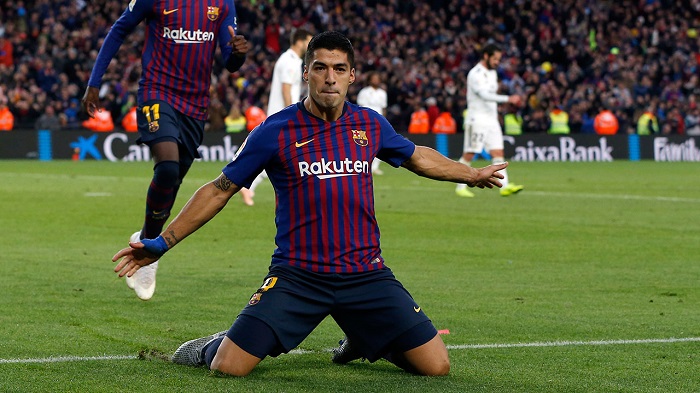 Luis Suarez stepped up in the absence of Lionel Messi to score a hat-trick in a humiliating El Clasico for Real Madrid and their beleaguered head coach Julen Lopetegui.

Barcelona controlled the first period with ease, building a two-goal lead by the break through Philippe Coutinho and a Suarez penalty awarded by a Video Assistant Referee review.

Marcelo's goal during a flurry of Madrid pressure at the start of the second period briefly raised hopes of a comeback before a Suarez double and Arturo Vidal header sealed the game as the visitors fell apart.

The result leaves Lopetegui in a seemingly untenable situation after Madrid's heaviest Clasico defeat in three years and Barcelona building a seven-point lead over their old rivals in the league.

Madrid midfielder Casemiro told Spanish television after the match: "This 5-1 sums up our season so far. We have played well in some spells, but that is this season - we are a disaster, all playing very bad, all of us.”

Lopetegui's side started the match in startlingly naive and passive fashion, with Jordi Alba raiding their right flank where utility defender Nacho was playing at full-back.

Alba provided the opening goal when he cut-back to Coutinho from the bar-line, and the former Liverpool man swept past Thibaut Courtois.

Saurez won the penalty he converted, darting across Rapheal Varane with a near-post run. Despite obvious contact from the defender, referee José María Sánchez Martínez waved away appeals for a penalty before changing his decision after consulting VAR.

Lopetegui switched to a back three at half-time with Casemiro moving back into defence, and Lucas Vazquez replacing Varane.

The alteration paid dividends when Marcelo got on the end of Isco's cross from his new, advanced wing-back position and turned home at the second attempt.

Karim Benzema headed over unopposed from six yards, and Real rued not capitalising on that short period of dominance as Barcelona slowly re-established their superiority.

The game was effectively over when Suarez showed magnificent reflexes and striker's instincts to turn home Sergi Roberto's cross with a stunning header from fully 14 yards.