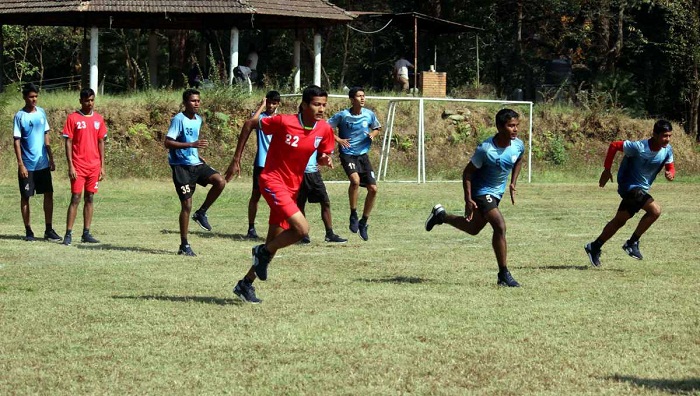 Bangladesh will play hosts Nepal in their 2nd and last Group A match of the six-nation SAFF U-15 Championship on Monday at ANFA Complex in Lalitpur Nepal eying to be group champions.

The match will kick off at 2:45 pm Bangladesh time.

Touring Bangladesh, which got off to a flying start in the three-team Group A crushing the Maldives by 9-0 goals in the opening match on Saturday featuring a hat-trick by Nihad Jaman, need just a draw against the home side to clinch the group title as Nepal outplayed the Maldives by 4-0 goals in their first appearance on Thursday.

However, Group A leader Bangladesh and 2nd placed Nepal have secured full three points from one match each to qualify for the semifinals with one match to spare at the coffin of all losers the Maldives.

Both the semifinals will be held on November 1 while the final will commence on November 3 at 3:30 pm at the same venue.

Ahead of the match against Nepal, Bangladesh U-15 players made their practice on Sunday, according a message received from Bangladesh Football Federation.

Head coach of Bangladesh team Mostofa Anowar Parvez said his boys struck to the game plan and were able to carve out a huge win against the Maldives.

“However, let’s not get too complacent. We still have to face Bhutan even though we’ve already qualified for the semifinals. We want to qualify as group champions,” he said.

“Nepal are a strong team. We know their strength and we’ll also try to give our best to defeat them,” the coach added.

Bangladesh skipper Mahedi Hasan is also controlling his emotions, saying, “Yes, we are happy with the big win (against Maldives). But we want to be the group champions. And for that, we have to work hard.”

Star forward Nihat Jaman, who scored four out of Bangladesh’s nine goals against the Maldives, wants to keep his scoring form. “I’m really happy to make a hat-trick in my first international match and help my team win. I want to keep scoring and expecting another hat-trick in the next match.”