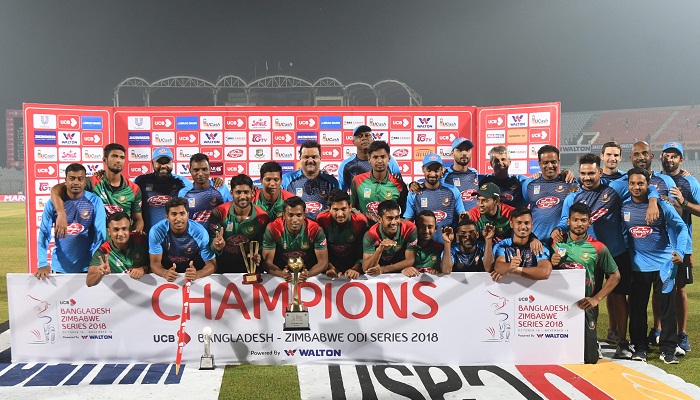 Imrul Kayes and Soumya Sarkar each scored a century as Bangladesh thrashed Zimbabwe by seven wickets in the third one-day international to complete a whitewash in the three-match series in Chittagong on Friday.

Chasing a modest target, Bangladesh lost a wicket in the very first ball of the innings when opener Liton Das was judged leg before off Kyle Jarvis, but Imrul and Soumya put together a record 220 runs for the second wicket to put the hosts on course.

Soumya, who was playing his first match in the series, led the charge with nine fours and six sixes to make the second century of his career.

Zimbabwe had to wait until the 30th over for their second success when Hamilton Masakadza forced Soumya to give a catch to Doland Tiripano at long on, but Imrul remained firm to complete his second century in the series.

Imrul, who hit 10 fours and two sixes in his fourth ODI century, earlier made 144 and 90 in the previous two matches to take his tally in the series to 349, the highest by a Bangladeshi in a bilateral three-match series, overtaking Tamim Iqbal's 312 against Pakistan in 2015.

"It's been a great series for me. I tried to give my best and I'm glad I got a chance to prove myself in this series," man of the series Imrul said after the match.

Imrul and Soumya earlier surpassed Tamim and Shakib Al Hasan's record of 207 runs in the second wicket against West Indies in July this year.

Zimbabwe skipper Masakadza said the partnership made the difference between the two teams.

"We had a good score, but that second wicket partnership took the game away from us," he said.

Mushfiqur Rahim was unbeaten on 28 to complete Bangladesh's 13th successive win over Zimbabwe.

Earlier, Williams shared 132 with Brendan Taylor for the third wicket to help Zimbabwe recover from 6-2 to post a decent score after Bangladesh skipper Mashrafe Mortaza won the toss and sent them in.

Taylor, who was dropped on six by fast bowler Abu Hider, made 75, his second successive half-century in the series, which came off 72 balls with eight fours and two sixes.

Williams, who smashed 10 fours and a six in his second ODI hundred, then added 84 runs with Sikandar Raza (40) for the fourth wicket after Taylor fell to left-arm spinner Nazmul Hossain.

Nazmul was the pick of Bangladeshi bowlers with 2-58.

The two teams will now play a two Test series, with the first starting on November 3 in Syhet.