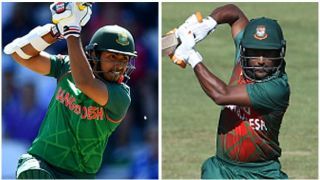 Soumya Sarkar fell to Zimbabwe captain Hamilton Masakadza after a magnificent 117 off 92 deliveries as Tigers were approaching towards a win against Zimbabwe.

Soumya Sarkar and Imrul Kayes played brilliantly against Zimbabwe and both the players got centuries as they were in aggressive mood early on.

Earlier, Zimbabwe recovered from the early loss of both openers to reach 286 for 5 in the third ODI against Bangladesh in Chittagong, Sean Williams striking a career-best 129 not out and sharing in fruitful partnerships with Brendan Taylor, Sikandar Raza and Peter Moor. The 132 runs he added with Taylor for the third wicket gave Zimbabwe the early advantage, an 84-run stand with Raza kept the score ticking over, while alongside Moor he took charge at the death to add 62 in quick time.

Those stands allowed Zimbabwe to get right what they had failed to do in the second game, when a similarly strong position was squandered against Bangladesh's death bowling that gave no quarter.

Zimbabwe's problems started when Hamilton Masakadza lost his third toss of the series, and intensified when Cephas Zhuwao slogged across the line to be bowled for a three-ball duck ball and Masakadza chopped Abu Hider onto his stumps. Zimbabwe were 6 for 2 inside three overs, but Taylor and Williams showed that the pitch could not be faulted with a counter-attacking partnership.