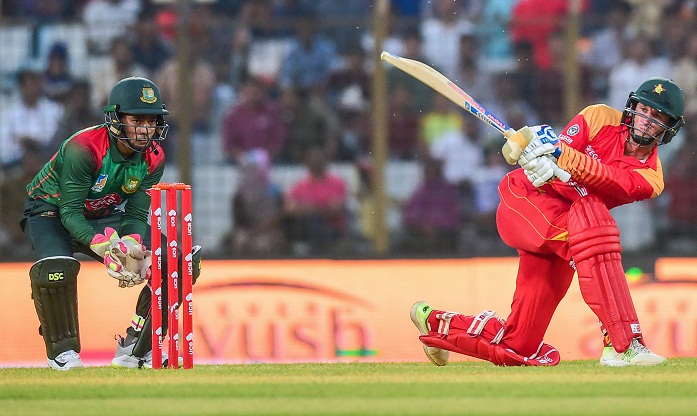 Zimbabwe finished with 286 for 5 against Bangladesh in the third game of the three-match ODI series at Zahur Ahmed Chowdhury Stadium in Chattogram on Friday.

A great recovery by Zimbabwe after they were 7 for 2 at the end of five overs. It started with Brendan Taylor and Sean Williams leading a recovery. Taylor was dismissed for 75 but Williams carried on and brought up his highest ODI score of 129 off 143 balls. He got good support from Sikandar Raza (40) and Peter Moor (28) as Zimbabwe finished with 286 for 5.

Spinner Nazmul Islam removed an appealingly a formidable third partnership by dismissing Brendon Taylor who hit 75 off 72 balls featuring eight boundaries and three six before being caught behind by Mushfiqur Rahim on 138/3 in 26.4 overs.

It was a bright start from the hosts in the third ODI as pace bowler Mohammed Saifuddin bowled out Cephas Zhuwao for duck in his third delivery of the inning's second over for Bangladesh's first breakthrough before left-handed pacer Abu Hider Rony bowled out opener-cum-skipper Hamilton Masakadza just after a six-ball gap, keeping the visitors on the same collection in 2.4 overs.