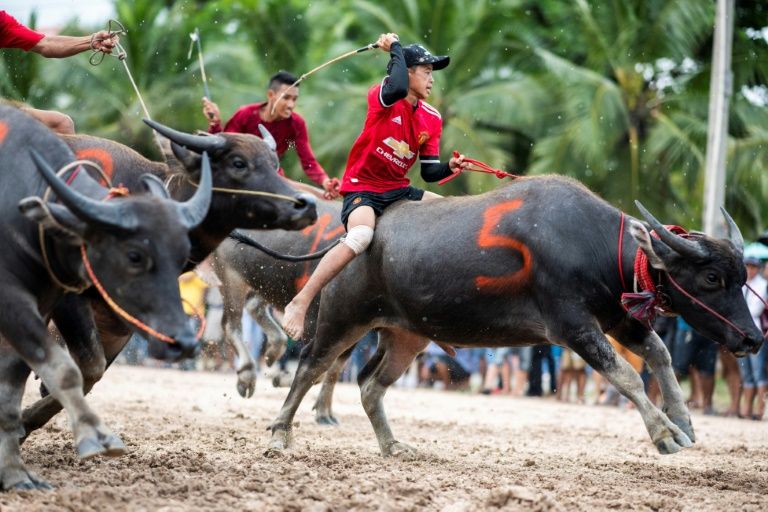 Several hefty buffaloes thunder down a dirt track in eastern Thailand, kicking up dust as they are urged toward the finish line by whip-wielding jockeys perched on their backs.

The race is the highlight of the annual week-long buffalo festival held in the coastal town of Chonburi which is now into its 147th year.

Buffalo trainer Pongsak Khanngern, 44, has entered two of his animals into the contest.

"I have trained them for months and I am confident that one of them will win," he said.

The decades-old tradition started as a way for farmers to blow off steam during the slow moments of an arduous rice-planting season, and over time many superstitions developed around it.

If a buffalo fell sick for example, farmers would pray to the spirits of their ancestors to heal it; if the animal recovered, a race would be offered in thanks.

On Tuesday, some 500 buffaloes were competing.

"There​ are​ ​many youngsters attending and​ (a lot of) interest in​ this event," mayor Chutharut Parinwachirapud said of the crowds, which numbered in the thousands at the festival.

For centuries, these gentle giants were of immense practical importance -- ploughing the fields, providing transport, and even defending villages in times of conflict.

But as farming became mechanised, buffaloes have taken on a symbolic role, acting as a reminder of Thailand's farming tradition.

Near the race track, farmers splashed water over the buffaloes' glossy hides to keep them cool under the sun as they wait for their race category.

Phaichit Payindee has been competing for years, and prides herself in keeping last year's reigning champion, four-year-old Ruang, strong and healthy.

"Today my buffalo is ready to defend his champion title," the 42-year-old said, adding that she doesn't care about the money at stake.

"It's not about the prize, but my buffalo's reputation."