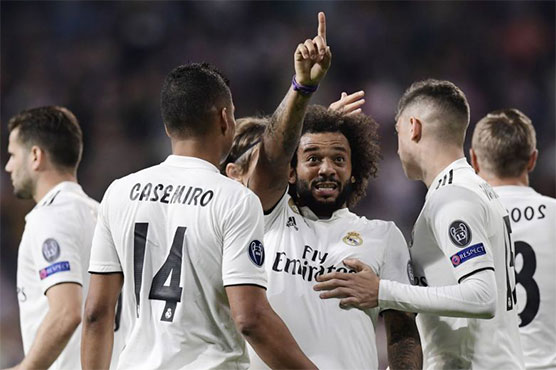 It might not be enough to save Julen Lopetegui but Real Madrid’s 2-1 Champions League win over Viktoria Plzen on Tuesday stopped the rot and restored some belief.

Barcelona are next at Camp Nou and even without the injured Lionel Messi, Madrid are unlikely to find them as generous if handed the sort of golden chances Plzen were presented with at the Santiago Bernabeu.

But after five games without a win, and three defeats in a row, victory was all-important, and Madrid secured it with a goal in each half from Karim Benzema and Marcelo.

It could have been more straightforward and when Patrik Hrosovsky pulled one back for Plzen with 12 minutes left, a nervy finale ensued. When it was over, there were disgruntled whistles from the home fans.

“I would have liked to achieve a more comfortable victory but the important thing is the three points,” Lopetegui said. “It can be a turning point.”

Madrid held on to reassert themselves in Group G, where the reigning champions now sit level on six points with Roma.

Whether Lopetegui is still in charge for the return fixture in the Czech Republic next month remains to be seen, although he was confident he would still be in position against Barca.

“I am absolutely convinced of that yes,” he said.

Florentino Perez may well have already made up his mind to make a change but there is still the question of timing.

Barcelona would be a cruel opening assignment for a new coach while defeat in a Clasico, perhaps a heavy one, could also kill any potential bounce.

Instead, Lopetegui was still on the touchline here, cajoling and clapping as his team created, and missed, more chances. Wincing as Plzen also squandered theirs.

He left all four of the club’s summer signings on the bench including Alvaro Odriozola, who was replaced at right-back by Lucas Vazquez. Perhaps it was a coincidence, or perhaps a message to the board.

There was gentle applause when the coach’s name was announced before kick-off and Madrid’s players started like they were trying for him too.

Sergio Ramos headed over and then against the post when twice allowed to run free but if they were eager up front, they were just as nervy at the back.

Keylor Navas jabbed a difficult pass straight out of play and then had to make a save, as Milan Petrzela raced in behind Vazquez and was denied on the angle by Navas’ thigh.

After weeks of agonising about scoring, Madrid then made it look easy. Vazquez, more comfortable going forward, chipped a cross to the back post, where the lively Benzema timed his run perfectly and nodded in from a yard.

Benzema and Isco both should have doubled the lead but opted to shoot when a pass would have given a tap-in. Gareth Bale and Toni Kroos each threw their arms up in frustration.

Plzen could have punished them as David Limbersky’s chip floated wide before Petrzela feathered over from two yards with only Navas to beat. It was a dreadful miss and spared the blushes of Marcelo, who had sold himself on the opposite flank.

But Marcelo’s defensive frailties have always come with an attacking benefit and his lifted finish in the 55th minute gave Madrid the breathing space they craved. Bale’s deft touch had sent him clear in the box.

Bale was freed by Benzema but his finish was blocked and Luka Modric’s scooped through ball suggested Madrid were even enjoying themselves, as Bale joined Isco in being substituted.

Plzen, however, had other ideas and after Hrosovsky curved the ball expertly past Navas’ left hand and into the corner, the visitors smelt a point.

They pushed forward and Madrid grew frantic, Nacho having to hook the ball away from Michael Krmencik in the box. Plzen’s fans were cheering louder after full-time.