Why speaking out in Nicaragua is getting tough 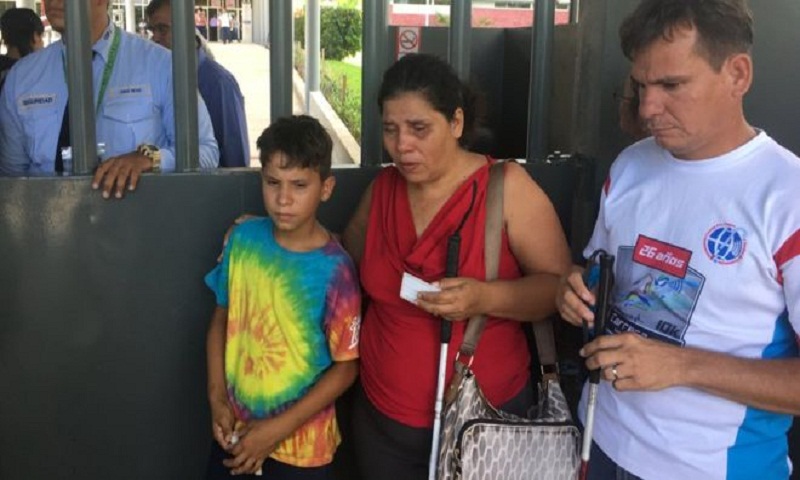 From encrypted messages with people in hiding, to clandestine meetings in secret locations - speaking openly in Nicaragua is becoming tough.

The simple task of talking to those affected by the country's deep-seated political crisis is increasingly complicated, as so many fear for their wellbeing.

In many cases, their fears seem justified too.

Some of the testimonies to emerge are reminiscent of the worst years of military governments in Latin America during the 1970s.

Take the story of Maritza Castellon and her husband, Juan Pablo Garcia, for example. A blind couple, they have represented Nicaragua in chess and Paralympic marathon running respectively.

Earlier this month, armed pro-government forces entered their home in the dead of night and took away their teenage son, Engel, for allegedly organising anti-government protests.

The men never identified themselves or produced any arrest warrant and Maritza says they stuck a gun into her chest.

"It was terrible," she told me as they sought word from the authorities on Engel's whereabouts.

"As blind people, we didn't know who they were or what they look like. My youngest son was crying and saying, "Mum, they're wearing balaclavas". There was a man kicking in the back door saying 'It's up to you, either get out of the way or I'm going to shoot it in'."

The government of President Daniel Ortega denies any wrongdoing by its forces.

Still, there is evidence of paramilitary gangs now operating with impunity and government support. Scores of students have been jailed as terrorists.

Little wonder people are remaining in the shadows.

What is going on in Nicaragua?

Demonstrators have been protesting since April, calling for an end to the government of President Daniel Ortega.

He says the protests are being led by terrorists who want to stage a coup against him.

The unrest originally began over pension reforms. But tensions have increased after people were killed in the government crackdown that followed.

Hundreds of people have been standing trial in the country accused of organising violent street protests.

Among them are three students facing terrorism charges for allegedly setting fire to a government-run radio station:

Among those unwilling to come out of her safe haven was Dora Maria Tellez, a former leftist guerrilla and one-time close ally of Daniel Ortega. Today, she says, he is a "tyrant".

"We've been saying this for 23 years and unfortunately, we were right," she tells me via Skype, sitting against a non-descript grey wall somewhere in Nicaragua.

In 1978, as a 22-year-old rebel, Ms Tellez led an audacious attack on the national parliament while it was in full session. It was a turning point in the revolution against the reviled dictator, Anastasio Somoza. A year later, the Sandinista guerrilla army took power.

In the 1990s, Ms Tellez split from the Sandinistas and established the Sandinista Renovation Movement. Now she fears she could be arrested by her former comrades.

"Ortega didn't only expropriate the FSLN [the Sandinista Front for National Liberation], he effectively dissolved 'Sandinismo' altogether and replaced it with 'Ortega-ism', the political model which forms this tyranny we Nicaraguans are living under."

Unsurprisingly, government supporters scoff at the idea that Nicaragua is under a dictatorship.

"Daniel Ortega is the constitutional president of this republic, the result of an electoral process in which he won a majority," says Gustavo Porras, head of the Sandinista-controlled parliament.

"Why would they label him a dictator? To justify the aggression."

He adds: "There is so much money washing around from [Washington-based organisations such as] the National Endowment for Democracy. They justify it by saying there is no democracy here and calling the president a dictator."

Nevertheless, since the worst of the street violence subsided, many international observers believe there has been a systematic programme of retribution by the state.

Dr Jose Luis Borgen agreed to meet in person but insisted on a safe place, the headquarters of a local human rights group.

A general surgeon with decades of experience, he was on his way to lodge a complaint against his arbitrary dismissal from a public hospital earlier this year. With the entire justice system allegedly in the hands of the Ortega government, he doesn't rate his chances of a fair hearing.

"We started to receive a large number of patients with gunshot wounds. Many died. People didn't have anyone to treat them during the conflict," he recalls.

The health ministry issued a ban on public hospitals treating such patients, he says, so a number of medical students and doctors "created clandestine clinics in homes and in some of the universities."

"Some treated patients, others brought in medicines or clean syringes, cotton swabs. All of this we did in our spare time."

It appears to have cost him his job.

There was an atmosphere of intimidation and persecution across the healthcare sector, he says.

"Then the mass firings began. 35 people were fired from one hospital, 40 from another, 18 from a third."

In total he estimates 300 healthcare professionals, half of them doctors, have been fired across the country.

The Ortega-controlled parliament's truth commission said in its report that healthcare hadn't been denied to anyone during the crisis. But critics say the report was a whitewash, and made no comment on allegations of subsequent repercussions against healthcare professionals.

"It's been difficult. My family is frightened. Many have received death threats, others have chosen to leave the country altogether."

It is a stark choice now facing many opponents of Daniel Ortega: either to live in hiding or go into exile.