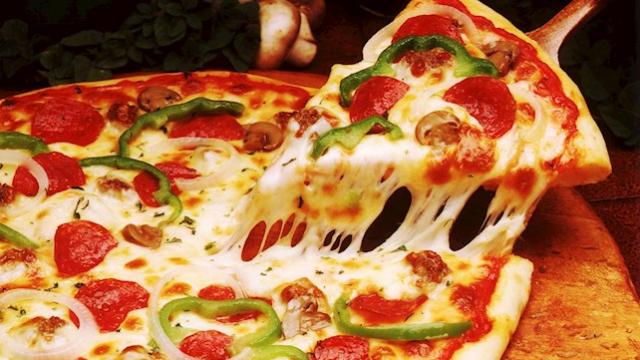 A pizzeria employee in Michigan, USA, went out of his way - very literally - to deliver pizza to to a man battling cancer. According to Fox News, when Julie and Rich Morgan lived in Michigan 25 years ago, they enjoyed pies from Steve's Pizza on every pay day. Even after the couple relocated to Indianapolis, the pizza from Steve's Pizza remained the "gold standard" for them, said Julie Morgan in a viral Facebook post.

In fact, the couple had planned to travel to Michigan to get the pizza - but a trip to the emergency room changed their plans.

"I took Rich to the ER where he landed in ICU for five days, and where we learned the news that his valiant cancer battle was coming to an end," said Julie.

Knowing what the pizza meant to them, Julie's dad called the pizzeria and asked if they could send Rich a card to cheer them up. However, the manager there, named Dalton, decided to do one better.

"Without hesitation Dalton asked what kind of pizza we wanted, and told my father he would bring it to us (by the way, Steve's doesn't deliver). My dad clarified that we were in Indianapolis, at least three and a half hours away from Battle Creek. Dalton said he understood that, and would leave after he closed the store," said Julie in her Facebook post.

"And so, while Rich and I slept, at 2:30 AM, Dalton rolled into our driveway, left the car running and delivered two extra special pizzas to my waiting family."

While Julie says that she is "beyond overwhelmed and humbled by this act of genuine kindness", people on social media have not been able to stop praising Dalton, who went above and beyond to deliver pizzas to a terminally ill man. According to Fox News, he travelled around 500 miles - or 800 km - to deliver the pies.

Since being shared online two days ago, Julie's post has already collected hundreds of comments and over 3,000 'shares'.

"God Bless you Dalton and the wonderful family you helped," writes one person in the comments section.  "So touching!" says another.

"I had to, I was super tired, but I made it and that's what counts. It was worth it. I'm glad I did that," said Dalton to Battle Creek Enquirer.