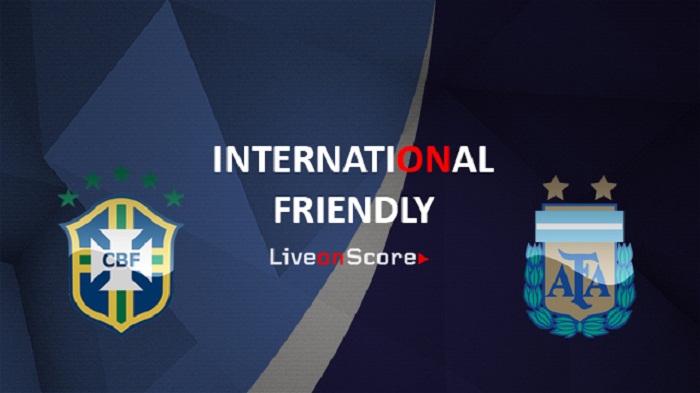 Both sides are on a tour of the Middle East, with Argentina beating Iraq 4-0 last Thursday and Brazil defeating Saudi Arabia 2-0 on Friday.

Sometimes described as the continent's Clasico, meetings between the two teams tend to be highly competitive and, despite it being a friendly, bragging rights are always at stake.

A number of regulars are missing from the Brazil panel, including Thiago Silva, Willian, Paulinho and Fernandinho, but Tite still has a strong squad to choose from.

Roberto Firmino and Gabriel Jesus will both start as part of Brazil's attacking trio, along with captain Neymar.

On the other hand, a host of star names are missing from the Argentina squad as coach Lionel Scaloni experiments with new faces.

Lionel Messi, Sergio Aguero, Gonzalo Higuain, Angel Di Maria and Marcos Rojo are among those not included in the panel.

Mauro Icardi, who missed the win against Iraq, will win his sixth cap for his country as he starts up front.

Both Brazil and Argentina are gearing up for the 2019 Copa America, so the autumn friendly games offer an opportunity for coaches to experiment with personnel and fine-tune tactics.

Argentina are shorn of some of their most recognisable performers for the game, but Messi, Aguero and Di Maria’s absence has allowed space for the likes of Lautaro Martinez and Ricardo Pereyra to shine, not to mention the likes of Icardi and Paulo Dybala.

Brazil, on the other hand, boast a typically strong panel, with Tite including stars such as Neymar and Philippe Coutinho in his squad for the match. Nevertheless, the 57-year-old has included a number of new faces, with the likes of Richarlison, Arthur and Malcom being given a chance to impress.

Tite was not pleased with his side's performance in their 2-0 win over Saudi Arabia last week and he will be demanding a much more passionate display against their bitter rivals.

"We were not convincing,” Tite told reporters of his side's victory. "We won because we had creativity up front and that was it. Brazil versus Argentina is never a friendly. We hope to be better for that."