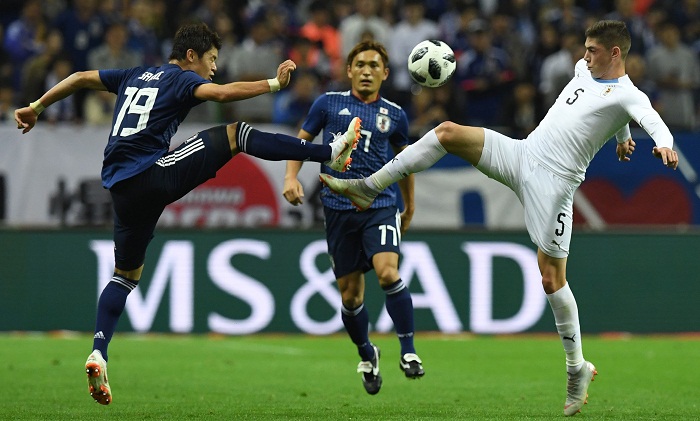 Japan stunned Uruguay 4-3 at home in a free-flowing international friendly on Tuesday to complete a miserable trip to the Far East for the South Americans.

Takumi Minamino netted twice against the World Cup quarter-finalists as Japan made it three wins out of three under new coach Hajime Moriyasu.

Uruguay suffered their second defeat in five days after going down 2-1 to South Korea last Friday and were fortunate not to concede even more goals in Saitama.

Minamino opened the scoring after just 10 minutes with a neat turn and finish before Gaston Pereiro equalised from close range midway through the first half.

Yuya Osako put Japan back in front when he tucked away the rebound after Uruguay goalkeeper Fernando Muslera spilled a shot from Shoya Nakajima.

Edinson Cavani restored parity 12 minutes into the second half, the Paris Saint-Germain forward pouncing on a horror back pass from Genta Miura as a crowd of almost 60,000 fell silent.

But the Blue Samurai regained the lead just moments later when Ritsu Doan fired into the bottom corner, before Minamino smashed home his second of the game after Muslera had parried a Doan rocket into his path.

Substitute Jonathan Rodriguez pulled one back for the two-time World Cup winners in the 75th minute but Japan clung on to record their third straight victory since their surprise run to the last 16 of the World Cup under Akira Nishino.

"That will give us confidence for the Asian Cup," said Moriyasu, looking ahead to Asia's showcase tournament in January.

"The players have pulled together and done a great job so far. And there's still plenty of room for them to grow as a team."