No Messi but Argentina 'have to' beat Brazil, says Romero 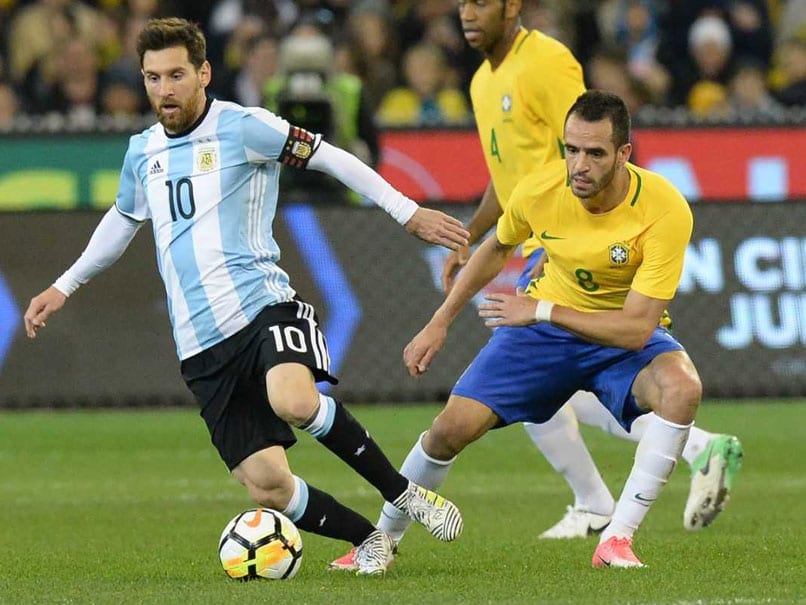 Argentina may be without superstar Lionel Messi but the two-time world champions simply must beat Brazil in a friendly in Saudi Arabia on Tuesday, Manchester United goalkeeper Sergio Romero says.

According to FIFA, this will be the 105th time the South American arch-rivals have faced each other in an official match, with Brazil marginally ahead on 40 wins to 38, with 26 draws.

And while Brazil, record five-time winners of the World Cup, have picked most of their star names, Argentina are without the likes of Manchester City's in-form forward Sergio Aguero, Gonzalo Higuain of AC Milan and Paris Saint-Germain winger Angel Di Maria, as well as Messi.

"I would love Messi to be here because that would give us a boost in quality," said Romero, back in the Argentina squad following a knee injury that prevented him from featuring in two friendlies in September.

"Adding the best in the world would be best for the future of the national team."

Messi also sat out Argentina's last three matches, all friendlies, since the country's disappointing last 16 elimination from the World Cup in Russia.

He is believed to have asked for some time off from international duty ahead of next year's Copa America in Brazil.

He may have won the Ballon d'Or five times and helped Barcelona lift the Champions League four times and La Liga on nine occasions, but Messi's only international honour was an Olympic gold medal in 2008.

He's been on the losing side four times in major finals: the 2014 World Cup in Brazil and three Copa America title-deciders.

At 31, he's starting to run out of opportunities to lead his country to international glory.

"I haven't spoken to him since the World Cup, but I hope his absence is only short-term. Hopefully he's just taking a rest," added Romero.

Even without a host of star names, and despite the prestigious opposition, anything other than victory would be met with consternation back home.

"Every time Argentina play, we have to win. And when playing against Brazil, even in a friendly, we still have to win and play our way, which is what the coach is asking of us," added Romero.

"Here we have a new group of players and we'll try to do our best for the team."

Argentina have not missed Messi too much so far, beating Iraq 4-0 in Riyadh on Thursday, having beaten Guatemala 3-0 in September, when they also drew 0-0 with Colombia.

It will likely be a different-looking XI in Jeddah to take on a Brazil team that laboured to a 2-0 win over hosts Saudi Arabia in Riyadh on Friday.

Despite featuring the likes of PSG star Neymar and Manchester City's returning forward Gabriel Jesus, Tite's side struggled on a muggy night in the Arabian desert.

But with Barcelona's Philippe Coutinho and Roberto Firmino of Liverpool likely to play too, Brazil won't need any help in getting fired up to face the Albiceleste.

"Any game against Argentina is different, it takes on a huge dimension and we all know what this encounter means," said Inter Milan defender Miranda.

"Our team has prepared well and we hope to play a great match and win."

But just like Scaloni, Tite wants to give some younger players a chance to prove their worth.

He said it's a match "between two teams undergoing a renovation. Here, we're giving opportunities to youngsters."

The two sides last met in June 2017 in a friendly in Australia, won 1-0 by Argentina, but Brazil romped to a 3-0 success in their last competitive fixture, a World Cup qualifier in November 2016.