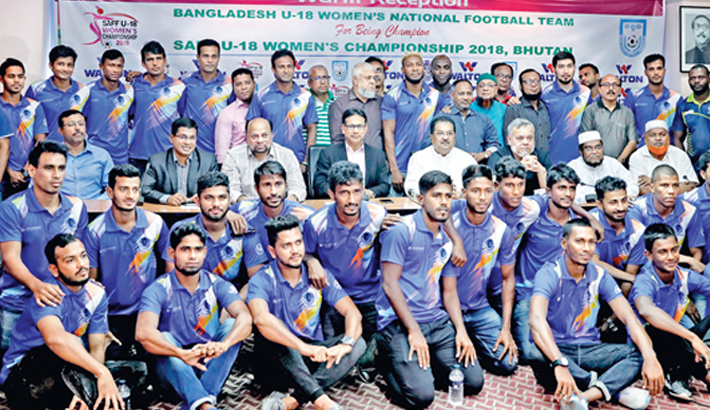 Sheikh Russel have assembled a heavyweight team for the upcoming edition of BPL. The team will be coached by famous domestic coach Saiful Bari Titu. He has been brought under Sheikh Russel set-up with salary contract which has set a new national record. Titu is also credited for the meteoric rise of Chittagong Abahani in recent times.

Domestic stars of the likes of Md Sohel Rana and experienced Uttom Kumar Bonik are part of the new-look Sheikh Russel Krira Chakra.

The club has registered four overseas players for BPL 2018-2019 along with twenty six local players. A total of 11 players were retained by Sheikh Russel Krira Chakra. Among them, four were retained utilising retention opportunity given by BFF.

The treble-winning team will be able to avail an international class support team which will be led by Saiful Bari Titu. Portuguese Francisco Jose Bruto and former Mohammedan Assistant Coach Mohammad Masud Parvez Kaisar will join Sheikh Russel as Assistant Coaches. Kenyan Abdul Iddi Salim will act as the Goalkeeping coach while former Bangladesh National Football Team Physiotherapist Shazib Shams Bakshi will be the physiotherapist of the team.

But the overseas recruits are what make Sheikh Russel a serious contender for the trophy. Their attack line-up will be led by Brazilian Alex Rafael. Alex has been a part of FC Salzburg of Austria and played for Ras Al Khaima of United Arab Emirates in 2017-2018 season. With his experience of playing against European giants Bayer Leverkusen and Lyon, Alex is sure to open a new dimension in Bangladesh’s football.

They have also roped in Raphael Odoyin Onwrebe who was the second highest goal-scorer of BPL 2017-2018 with 15 goals to his name. He will add great value to Sheikh Russel attack. To fill the Asian quota, Titu has chosen Uzbekistan National Team player Azizov Alisher.