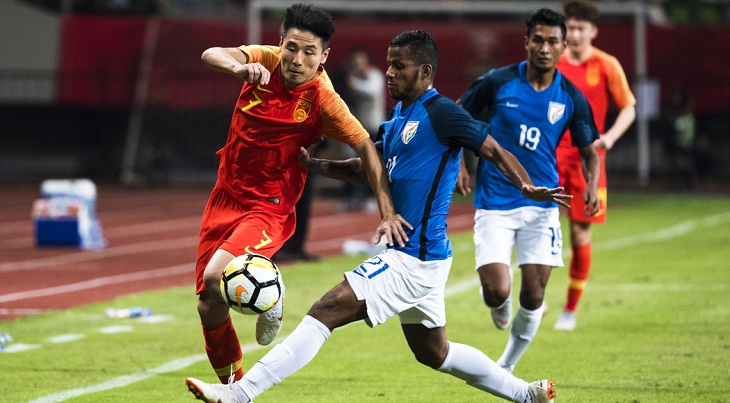 In a scoreless 90-minute match India ran its Asian rival China to a draw in a Saturday night friendly football match, sparking outrage among China's legions of football-obsessed fans.

The Chinese national team's struggles were laid bare as it missed chance after chance to take the game, falling short of expectations for a big win at home.

It is a setback for China's unbridled footballing ambitions -- President Xi Jinping is a big fan of the sport and has vowed to make the country a football superpower.

It is not the same story in cricket-mad India, where football is far from the most popular sport.

The game in Suzhou, near Shanghai, was the first match between the two Asian giants' senior sides in 21 years. India had not beaten China in its last 17 attempts.

Although China controlled the pitch Saturday, its top 11 players were unable to put away a goal.

"This match shows there are still a lot of issues to sort out," China's state television announcer said at the close.

But both sides missed chances. On one set piece from roughly 25 metres out, four Chinese defenders left Indian team captain Sunil Chhetri uncovered on the far post, saved by his misplaced touch that sent the ball soaring over the crossbar.

In the second half, Chinese midfielder Yu Hai had India's goalie behind him with the ball inches from the net, but was still unable to get it across the goal-line.

China and India together account for more than a third of the world's population, but in football terms they are minnows, often beaten by countries a fraction of their size.

India is 97th in FIFA's rankings and China 76 -- sandwiched between Zambia and Lebanon -- underlining how far adrift both are from the global soccer elite.

China's football-crazed fans did not turn out in droves to see the match, with row after row of seats empty in the 30,000-plus capacity stadium.

But fans piled on the national team's Twitter-like Weibo account after the match, denouncing the team that has become a national disgrace to many.

"Does China's national team have any face left?" commented one user.

Another advocated turning the vast sums spent on football to other pursuits like building semiconductors.

"This collision of China's national team with India's, one-third of the world's population, shows that even among 2.7 billion you can't find one good footballer," said one, with the username "that fart so smelly."