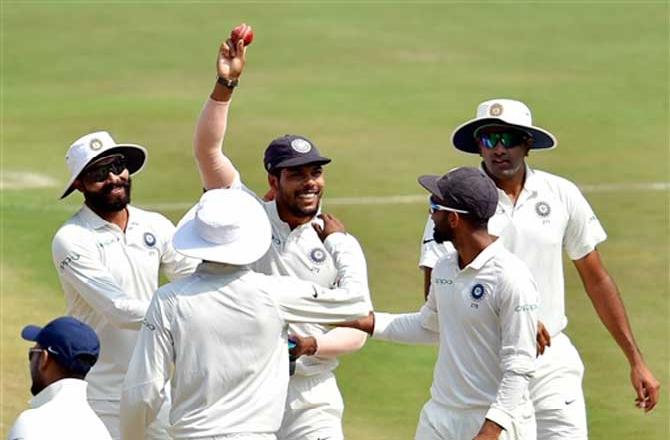 India got off to a decent start, reaching 80/1 at lunch after pacer Umesh Yadav starred with the cherry, taking his second five-wicket haul to bundle the West Indies out for 311 within the first hour of the second day of the second Test at the Rajiv Gandhi International Stadium here on Saturday.

However, opener Lokesh Rahul's (4) struggles with the willow continued as the right-hander dragged a good length delivery from Windies skipper Jason Holder onto his stumps.

At the break, Prithvi Shaw (52 not out) and No.3 Cheteshwar Pujara (9 not out) went back undefeated after adding 19 runs for the second wicket, as India trail the tourists by 231 runs.

The teenaged Shaw continued from where he left in the first Test at Rajkot, going at a strike rate of more than 100, before a rare lapse of concentration got him a reprieve on 45.

Shaw, who mercilessly belted left-arm spinner Jomel Warrican for three consecutive boundaries in the previous over, attempted to square cut a short ball from the same bowler but only managed to get a nick, which Shai Hope at first slip failed to grab.

The Mumbai right-hander single-handedly dominated the first-wicket partnership of 61, in which Rahul's contribution was just 4 runs, before getting to his half century off mere 39 deliveries.

Pujara, who came at the fall of Rahul, went about in his customary fashion, striking the left-armer Warrican for two classy boundaries before the interval.

Earlier, resuming at 295/7, West Indies could add just 16 runs to their overnight total with Roston Chase completing his fourth Test ton, second versus India before falling to Umesh, who returned career-best figures of 6/88.

Overnight batsman Devendra Bishoo (2) was the first to depart, in the very first over as he failed to hang around.Chase (106) ticked off his century while Warrican (8 not out) wielded his bat for sometime before Umesh speared in to pick the centurion Chase first and then last man Shannon Gabriel for a golden duck to wrap up the innings.