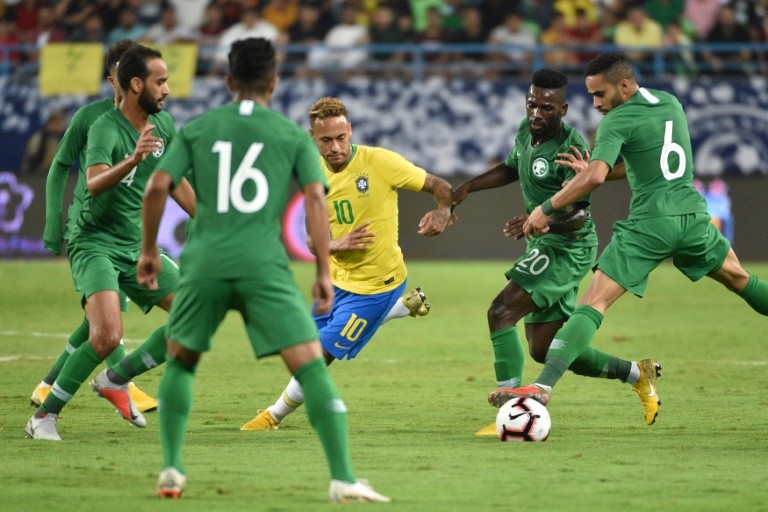 Brazil struggled to a 2-0 win over hosts Saudi Arabia in a stuttering performance on a muggy night in Riyadh in a friendly international on Friday.

Manchester City's Gabriel Jesus scored just before half-time and Alex Sandro powered in a header from a Neymar corner in the sixth-minute of injury time.

Brazil will next play arch-rivals Argentina on Tuesday.

Argentina, who will be without the rested Lionel Messi, beat Iraq 4-0 on Thursday.

Brazil will be the more concerned team ahead of Tuesday's showdown in Jeddah as they failed to spark in the game against the Saudis, who almost found themselves a goal up after six minutes, before Casemiro hacked clear.

Jesus, who missed Brazil's friendly victories over the United States (2-0) and El Salvador (5-0) last month, celebrated his return to the side with a goal just before half time.

Jesus saw a goal-bound header brilliantly saved by Saudi keeper Mohammed Al Owais before Neymar slipped him in to score in the 43rd minute.

Tottenham's Lucas Moura almost made it two after another fine pass by Neymar.

Neymar came close himself a few minutes later with a shot from just outside the penalty area.

The Saudis ended the match with 10 men after Al-Owais was sent off with 10 minutes left for handling the ball outside the penalty area when pressured by Richarlison.