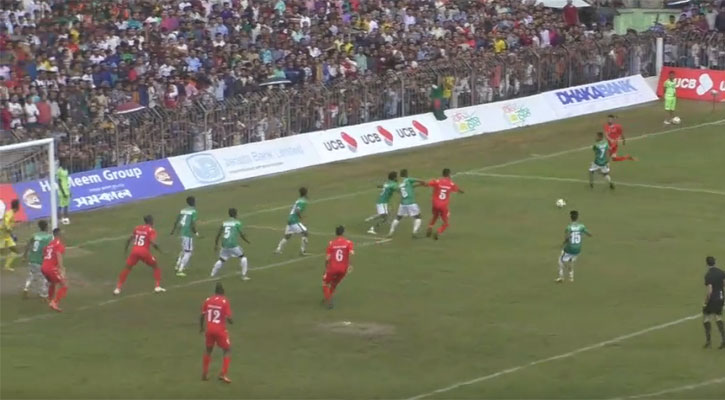 Bangladesh’s hope of playing final of the prestigious Bangabandhu International Gold Cup Football tournament vanished into blue as they suffered a 2-0 goal defeat to strong Palestine in their second semifinal held on Wednesday at Birshreshtha Ruhul Amin Stadium in Cox's Bazar.

With the win Palestine confirmed their final spot and they will meet first semi-final winners Tajikistan in the title deciding battle scheduled to be held on Friday at country’s premier venue Bangabandhu National Stadium in the capital.

Prime Minister Sheikh Hasina is expected to present in the final as the chief guest.

In the day’s match, Mohammed Balah opened an account for Palestine early in the 8th minute while Sameh Maraaba sealed the victory scoring the second goal for Palestine in the 90+4th minute of the match.

Bangladesh, however, conceding early goal tried to stage a fight back but they failed to score any goal in front of fifteen thousand capacity jump-packed stadium.

Earlier, Bangladesh finished group B runners-up when they beat Laos by 1`-0 goal and suffered a solitary goal defeat to Philippines in their last group encounter.