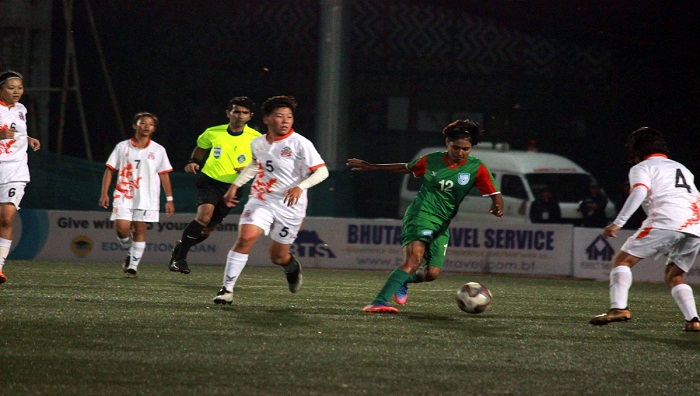 Bangladesh through to final of the six-nation first SAFF Under-18 Women's Championship by routing hosts Bhutan 4-0 goals in the 2nd semifinal at Changlimithang Stadium in Thimphu on Friday.

Bangladesh will play the final of the maiden edition championship against Nepal at the same venue on Sunday (Oct 7).

Nepal reached into the final denying the South Asian giant India by 1(2) - 1(1) goals in a penalty shootout in the 1st semifinal after 1-1 in the stipulated and extra time on the same day.

In the semifinal, Bangladesh took the lead in the very second minute as Sanjida Akhter's 25-yards right-footed shot from the right-top corner of the box found the net deceiving goalie, 1-0.

Bangladesh dominated the first half by 2-0 goals as Mishrat Jahan Mousumi placed the ball home from the top of the six yard box in the stopgap time after 45 minutes.

Krishna Rani Sarkar and Shamsunnahar extended the winning margin scoring one goal each in the 60th and 86th minutes respectively, 4-0.

Bangladesh reached into the semifinals as the Group B champions with all-win record as crushed Pakistan by a record 17-0 goal - the highest margin victory for Bangladesh football at any level senior or age-group - in the second match, starting their campaign with a 2-1 goal win against Nepal.

Hosts Bhutan managed a seat for semifinal as the Group A runners up crushing the Maldives by 13-0 goals after a 0-4 loss against Group A champions India.

Nepal placed Group B runners up by defeating hapless Pakistan by 12-0 goals in the second match.