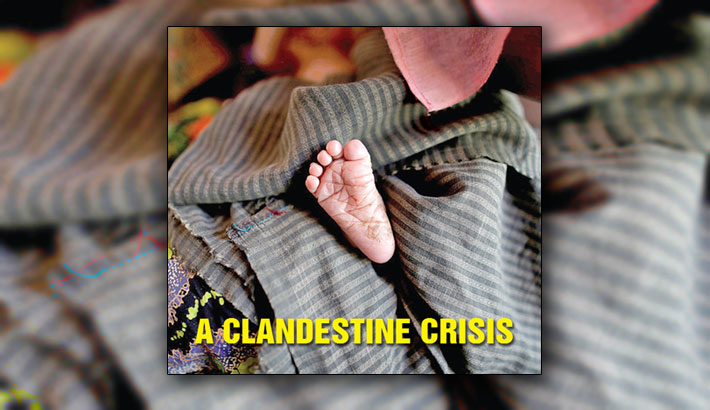 An adorable baby boy was put in the floor-laying-bed of a temporary tarpaulin shed of Balukhali refugee camp in Ukhia. The 4-month-old boy has no name. His mother, Maymuna Begum (not real name), cradles him during the sweltering nights when he cannot sleep, patting his bare back with her palm. She had done the same for her two other children. They have beautiful names and she loved them without hesitation. But when she sees her newborn boy lying in her arms, she relives a nightmare. He is an innocent reminder of the day (last year) when soldiers of Myanmar Army burst into her village in Rakhine state. They shot her husband and brother-in-law to death and chased her into a paddy field. There two men in army uniforms raped her and left her bleeding in the dirt. Consequently after hiding in different villages of Rakhine province for over two and a half months Maymuna reached Bangladesh along with 700,000 other Rohingyas by trekking high hills, passing muddy roads and crossing rough sea by wooden boats to save herself and her 4-year-old girl and 2-year-old boy. When she came to realise that she has conceived it was too late to abort the child. With such a state of her health she couldn’t move much to manage anything to eat and thus she and her children had to starve for lack of food in many days. Whenever she remembers those difficult days, she cannot stop her tears. After long months of struggle finally she gave birth to a baby boy in late May this year. Still she is going through a tough time as it’s hard for her to go outside the shed keeping a 4-month-old boy in custody of a 4-year-old girl. When she thinks about the future of her children in a foreign land without her husband and other relatives, she doesn’t see any hope. Maymuna Begum is not a lone example. She is one of those numerous Rohingya girls and women who are now passing a miserable life with their unwanted pregnancy and children in the world’s largest refugee settlement in Cox’s Bazar. Currently many of such mothers are at serious stake due to lack of sufficient economic support and medical care and going through malnutrition and trauma. And future of their luckless children is hanging in the balance as neither Myanmar nor Bangladesh will recognise them as their citizens. 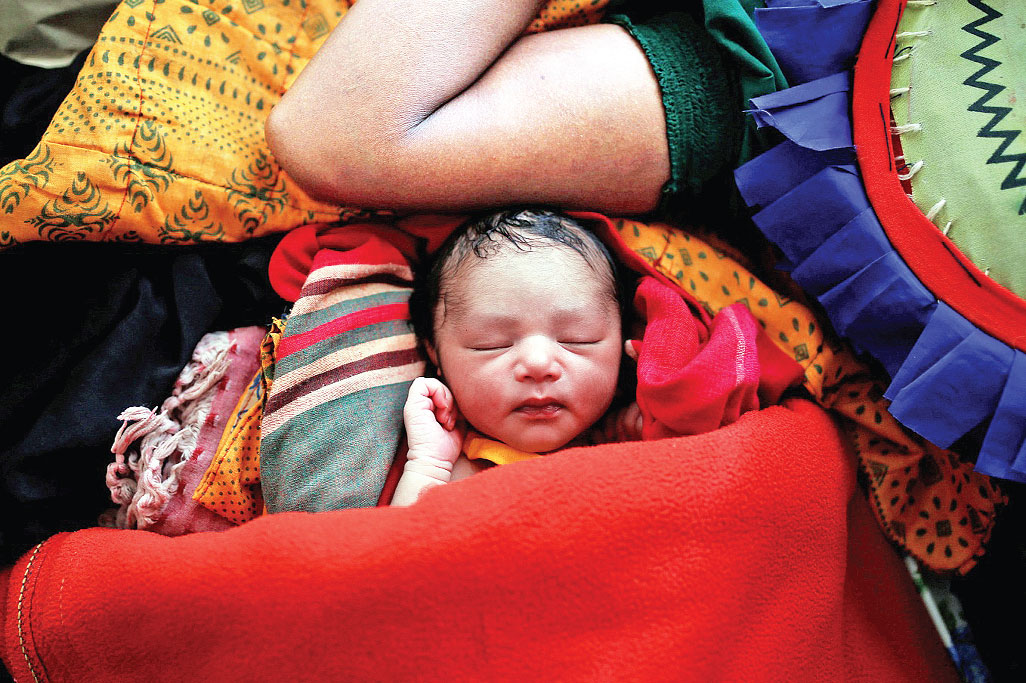 Everyone in the over-crowded Rohingya refugee camps in Cox’s Bazar is well aware of the rapes and how the Myanmar military has, for decades, used sexual violence as a weapon of war, particularly against the religious minority groups that are kept excluded from its mainstream society. They know that it is not the fault of the Rohingya girls and women, who were often gang-raped at gunpoint, their mothers, sisters or daughters sobbing and screaming nearby. But they cannot overlook the traditional Rohingya Muslim society where rape brings dishonour to the households and any resulting pregnancies are viewed as heaping even more disgrace on families. If an unusually pale child is born, the mother must endure whispers that the complexion is the result of a father from Myanmar’s Buddhist community which is considered as sacrilege. When it is the case of married rape victims, then what is the situation of unmarried girls or widows who have become pregnant as the consequence of rape is easily understandable. Thus many survivors are made to suffer twice – first from the trauma of sexual violence and again from the ostracism of a conservative society that abandons them when they need the social support most. In a society that normally embraces children cordially – to have six, seven or eight infants is common among Rohingya families – the babies who are now being delivered tend to be treated differently. 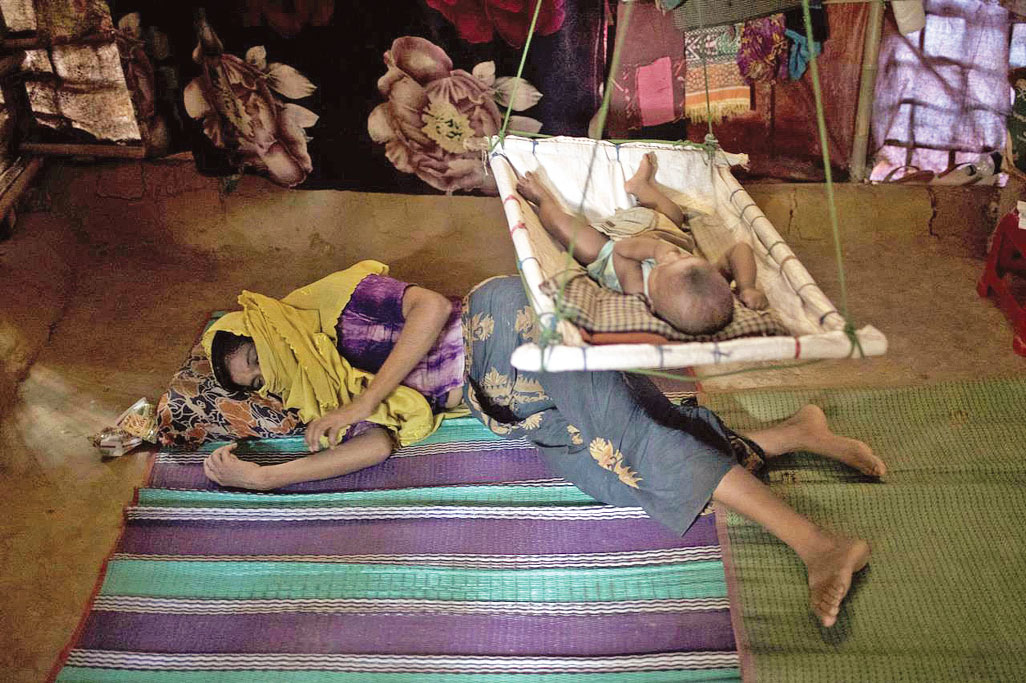 When it comes to estimating the exact number of babies conceived by rape in Myanmar, it seems almost impossible to figure out the exact amount as most Rohingya women choose to deliver their babies in their shelters rather than in camp hospitals or clinics. Health workers operating in the camps have spoken anecdotally of a spike in deliveries that would coincide with rapes from late August to October last year, the most intense period of violence against the most persecuted minority of the world. Thus they observe that they have seen a sudden rise in births in May, June, July and August than other months in the camps. Realising the situation a number of traffickers are working in the areas and telling the women to sell their newborn children to come out of unwanted situation. While many survivors of rape terminated their pregnancies after arriving in Cox’s Bazar, many of them couldn’t do so as the law of Bangladesh doesn’t allow abortion after twelve weeks. According to Doctors Without Borders, a medical aid group, half of the Rohingya girls treated for rape in the refugee camp clinics were eighteen or less than eighteen! Even there are a big number of girls who did not understand what rape could do to their bodies! In other cases, women did not realise they were expecting as they thought their menstruation might have stopped because of malnutrition and trauma. 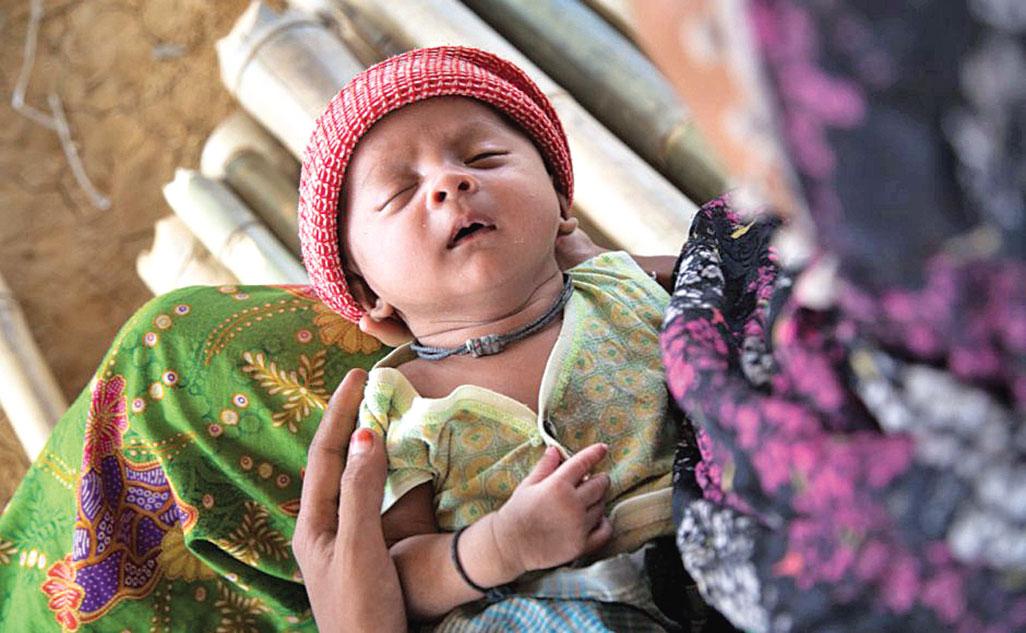 The stigma of rape made it very hard for expectant Rohingya women to come out openly with the fact of their pregnancy. When they had no other way except stepping out of temporary shed during emergency, they tried to flatten their growing belly by wrapping it in tight layers of scarves. There are many reports from local Rohingyas that many girls, especially young adolescents, strictly hid the fact of their pregnancy and never sought any medical care. A few such girls even died during the pregnancy or at the time of delivery. Though the rest of the victims survived, they are not visiting camp clinics to avoid social disgrace. This shy feeling has increased further health risk for them and their newborn children. Besides, traditional norms and conservative values have left many Rohingya mothers with little knowledge of basic sexual and infant health care. Thus maternal and infant health has always been a matter of concern in the Rohingya refugee camps, where poverty and a lack of education are creating health risks for new moms and their babies. Doctors recommend exclusive breastfeeding for at least the first six months of a child’s life as vital nutrition begins at birth. But many mothers are often unable to breastfeed because of stress and the poor quality of their food. Volunteers go into the camps to follow up with new mothers but the victims of rapes barely meet with them and follow their suggestions. 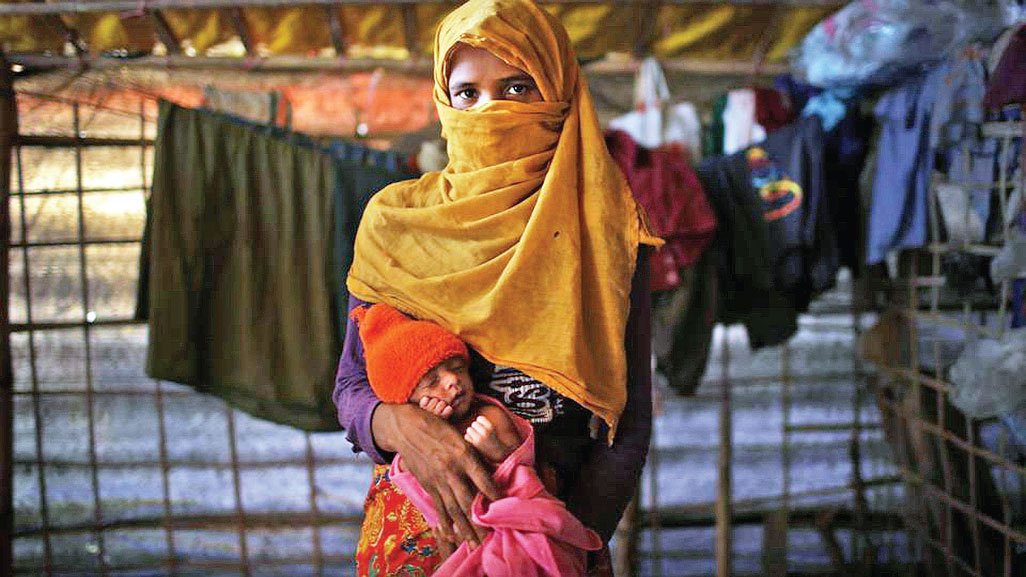 The physical, emotional and social development of young children has a direct effect on their overall development. Thus making the early years of children’s lives pleasant is the best way to create a better world. But the multifaceted economic and political mechanism often ignores humanity and goes beyond all positive expectations. The situation the Rohingya children (born from rapes) are going through is frightful from all aspects. They are those children of the twenty-first century who have been welcomed to the world in the cruelest way. Identity is an innate, undeniable, and indivisible feature for every human being. But these children have serious complication as far as their identity is concerned as they belong to a combination of Rohingya women and Buddhist men. All the children have the right to be the citizen of a particular country, but the unwanted Rohingya children have no state. Bangladesh has provided shelter to their mothers but the country doesn’t recognise them as its people. On the other hand, Myanmar, the country where their parents lived for generations, never acknowledges their mothers as their citizens, let alone accept them. Albeit children should be grown up under the supervision and guidance of their parents, these luckless children are deprived of the affection of their fathers. Evicted from their roots and distressed by the curse of poverty they are living a substandard life in a foreign land. If everything remains same, these children will surely become the victims of underage marriage, sex trafficking, child labor and militant recruitments.

Rape has been used as a form of genetic imperialism, where the forcible impregnation can undermine national, political and cultural solidarity, changing the next generation’s identity and confusing the loyalties of all victimised survivors. And that was what Myanmar security forces aimed while torturing Rohingya women. And the situation turned so terrible that Andrew Gilmour, UN Assistant Secretary-General for Human Rights, described it as ‘frenzy of sexual violence’. Neither the hapless Rohingya mothers, who have given birth to the children due to rapes, nor their unwanted children are responsible for their crisis. But the world seems reluctant to punish the real perpetrators responsible for this disaster. Rohingya mothers and children have listened to enough sympathetic words and assurance of justice. Now international community should come forward with some serious initiatives. They must conduct a proper investigation to find out what has happened to the Rohingya community in Myanmar and take exemplary legal actions against the barbaric state forces of that country. And of course, they have to exert effective pressure on Myanmar so that it takes back these innocent children along with other Rohingyas to their own country and ensures a standard life for them. Otherwise one day these Rohingya infants will blame all those responsible people of the world for their silence and inactivity.