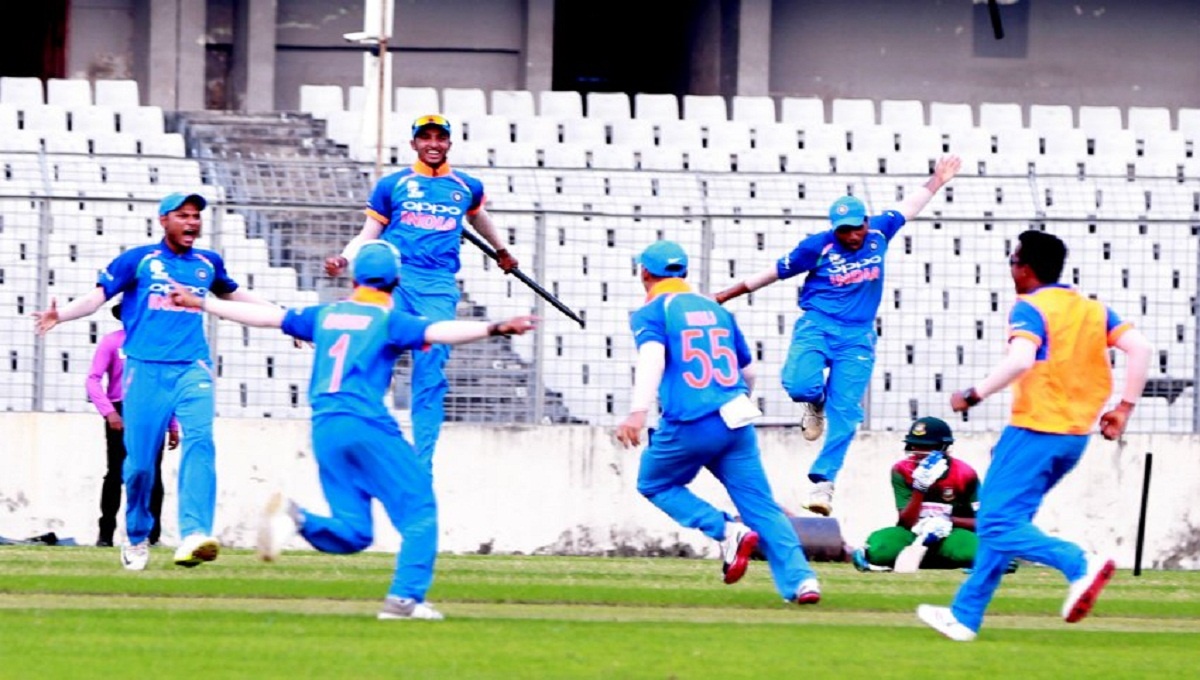 Hosts Bangladesh narrowly missed the final of the eight-nation ACC U-19 Asia Cup Cricket losing to three times champions India by just two runs in the first semifinal at the Sher-e-Bangla National Cricket Stadium in Dhaka on Thursday.

Bangladesh again lost to India narrowly for poor match temperament requiring only 12 runs off 48 balls with four wickets in hand, but failed to utilize golden chance due to lower order collapse. Finally, Bangladesh needed only three runs off 22 balls, but their last batsman Minhazul was victim of run out, shattering all the Bangladesh’s hopes.

India will play the final on Sunday (Oct 7) against the winners of defending champions Afghanistan and Sri Lanka, who will meet each other in the 2nd semis on Friday at the same venue.

In the day’s match, India opted to bat first after winning the toss and were all out for 172 runs in 49.3 overs with Sameer Chowdhury making 36, Anuj Rawat 35, A Badoni 28 and A Gongapuram 17 runs.

In reply, Bangladesh narrowly missed the final berth from an winning position as they were bundled for 170 runs in 46.2 overs, just three runs shot of their target, with 22 balls to spare.

Number five batsman Shamim Chowdhury pairing with number seven Akbar Ali was in the right track to win the match contributing 74 runs in the 6th wicket stand to carry team total to 139 runs from 65.

But after collapse of Akbar Ali’s wicket for 139/6 in 35.1 overs and Shamim Hossain dismissal for team total 161/8 in 42.2 overs, caused their miserable defeat.

M Janjra bowled economically to capture three wickets for 25 runs in his nine over spell with two maidens and was adjudged man of the match.

Earlier, Bangladesh advanced to the semifinal of the U-19 Asia Cup as the Group B runners-up beating Hong Kong by five wickets and Pakistan by three wickets after conceding six-wicket defeat against Sri Lanka in the opener.

India smartly qualified for the semifinal as the Group A champions with all-win record beating Nepal by 171 runs, United Arab Emirates by 227 runs and Afghanistan by 51 runs in the group engagements.

Sri Lanka clinched Group B crown to reach the last four stages with all-win record beating Bangladesh by six wickets, Hong Kong by 10 wickets and made a passage for Bangladesh semifinal eliminating Pakistan by 23 runs in last group affairs.

Afghanistan managed a semifinal berth as the Group A runners-up beating UAE by five wickets, Nepal by three wickets and conceded a 51-run defeat against India.