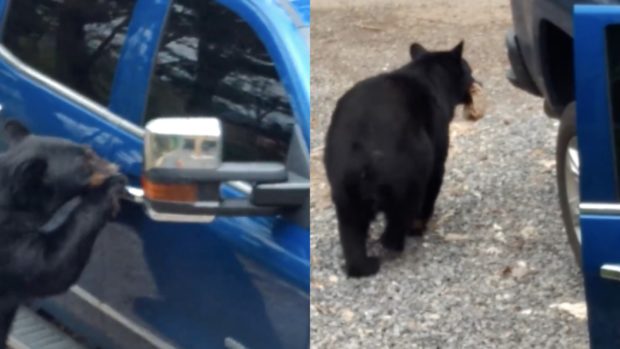 There's no saying what a hungry bear would do to get its paws on some food. Here's a little glimpse. A bizarre video posted on Facebook shows the moment a hungry bear opens the door of a car and steals food kept inside before casually walking away like it's no big deal.

The video has been posted online by Facebook user Karen Simington Hogarth, whose husband, Steve, recorded the video at Gatlinburg, Tennessee. "Bear in Gatlinburg at my husband's job today," she says about the video, posted on September 25.

The video, less than a minute long, shows the bear strolling up to the car. After probably smelling some food kept inside the vehicle, the bear gets on its hind legs and promptly opens the car door with its paw. Moments later it is seen walking away with a bag.

"But what isn't on the video, he came back about 10 minutes later and Matt, the heat and air guy, locked his doors at that point and that bear came back and was opening every door," Mr Hogarth told Wate.com. He also said that the bag pulled out by the bear only had garbage in it.

The video has collected quite a few reactions from people on Facebook.

"This is why you lock your trucks y'all," says one Facebook user. "Sorry but that's hilarious," says another. "It IS amazing how they know to just walk up to a vehicle and open the door. Just wow," says another.

Earlier this month, pictures posted on Facebook showed the sorry state of a car after a bear entered it and got trapped inside it. Photos posted by the Tennessee Wildlife Resources Agency showed the vehicle's interiors completely destroyed by the bear. Officials used the pictures to warn people, asking them to keep their vehicles locked.