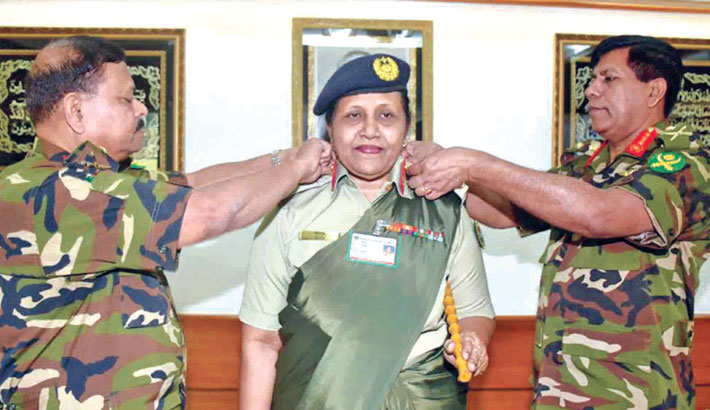 With the promotion of Brigadier General Dr. Susane Giti to the rank of Major General, Bangladesh Armed Forces got for the first time in its history a female army officer in this higher rank.

It may be mentioned that her husband Brigadier General (retired) Asadullah Md. Hossain Saad was a successful military expert physician, the ISPR release said.

The Prime Minister has initiated a breakthrough in the women empowerment.  By introducing a female officer in the army as a Major General, another new horizon of that step was initiated, the ISPR release added.

Maj Gen Dr. Susane Giti obtained the MBBS degree from Rajshahi Medical College in 1985. Later, in 1986, he joined the Bangladesh Army as a physician with the rank of captain.

In 1996 she was the first woman to obtain FCPS degree in Hematology. She also served as the expert pathologist for UN peacekeeping missions and several military hospitals.