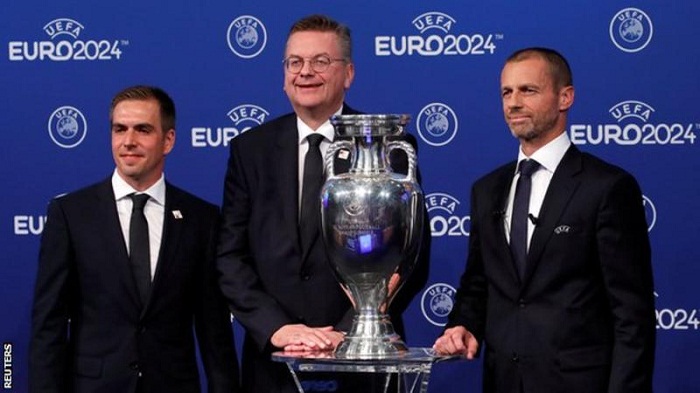 Germany has beaten Turkey to host Euro 2024 after a vote by Uefa's executive committee on Thursday.

The decision means Germany will stage the European Championship for the first time as a unified country, with West Germany having hosted the 1988 tournament.

Turkey is yet to host a major international football tournament.

'The procedure was transparent'

Euro 2024 will return to a single-host format after Euro 2020 is held across Europe, including Germany.

After announcing the winner, he added: "The procedure was transparent. The voting was democratic. Every democratic decision is the right decision so I can only say I am looking forward to seeing a fantastic Euro in 2024."

Former Germany captain Philipp Lahm, an ambassador for his country's bid, said: "We have amazing stadiums, fans who love football, first and foremost we have people who love celebrating with other Europeans.

"We will organise a huge football party in Germany."

Germany and Turkey were the only countries in the running for Euro 2024 and, in the build up, an evaluation report by Uefa stated Turkey's bid had risks.

The report added that Turkey's lack of an action plan in the area of human rights and limited hotel capacity in many cities were matters "of concern". It also labelled the scale of transport infrastructure work required "a risk".

However, it did say the Turkish bid was "in line with the long-term objectives of Uefa."