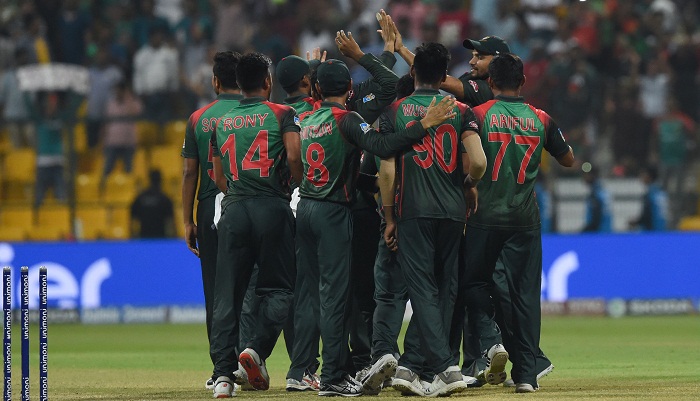 After a magnificent victory over Pakistan, motivated Tigers are ready to roar again as they face India in the final of ACC Asia Cup scheduled to be held on Friday (Tomorrow) at Dubai International Cricket Stadium, in United Arab Emirates (UAE).

An injury hit Bangladesh stunned Pakistan as they beat them by 37 runs in the virtual semifinal clash despite absence of their key players for injury.

The Bangladesh bowling attack is one of the most potent in 50 over cricket with Mustafizur Rahaman, Rubel Hossain, and Mashrafe Mortaza ready to lead from the front to test the Indian strong batting line up.

The cutter master Mustafizur has a lot of tricks up his sleeve while Mashrafe’s experience has also strengthened the teams’ bowling line-up.

In batting, the team will bank heavily on the ever-dependable Mushfiqur Rahim, who has been the ‘crisis man’ along with the very stylish Mahmudullah Riyad.

However the Tigers’ will have to undergo tough challenge by an in-form Jasprit Bumrah. Tackling the guile of Kuldeep Yadav, deception of Yuzvendra Chahal and probing questions from Ravindra Jadeja will also be quite a task for the Bangladesh line-up.

However, India will remain overwhelming favourites to win the tournament for a record seventh time while Bangladesh will be hoping to be third-time lucky in the Asia Cup.

Southpaw opener Tamim Iqbal is already out with a fractured hand and Bangladesh team also won’t have star all-rounder Shakib-Al-Hasan in the line-up owing to a finger injury.

He is expected to undergo surgery which will also force him out of the home series against Zimbabwe starting October 21.

On the other hand, it will be a different test though for India.

A victory in the Asia Cup without their skipper and best batsman Virat Kohli will be a big statement going into next year’s World Cup.

It should not forget, the Asia Cup trophy will be a healing touch after 1-4 Test series defeat in England.

After resting five regular players during a wake-up call from Afghanistan in their tied Super Four match, India is expected to restore their orders in the final against Bangladesh.

Two openers skipper Rohit Sharma and his deputy Shikhar Dhawan will be back at the top of the order while Jasprit Bumrah, Bhuvneshwar Kumar and Yuzvendra Chahal will bolster the bowling line-up.

A lot will depend on the start provided by Rohit (269 runs) and Shikhar (327 runs) as the middle order has looked shaky at times.

Ambati Rayudu has looked set in all the games but has not finished off well while Kedar Jadhav and Mahendra Singh Dhoni have struggled in middle overs.

Dhoni’s struggle is the biggest worry as a total of 240 plus could prove to be challenging on a slow track if the team bats second.

The only match where the Indian middle order was tested was the Afghanistan game where they came a cropper despite a century opening stand by the makeshift pair of KL Rahul and Ambati Rayudu.

India is expecting significant batting contribution from Dhoni in the middle in order to face more deliveries.