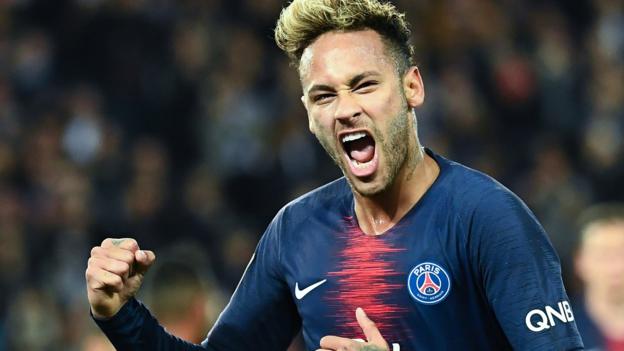 Conceding first was little setback for Paris Saint-Germain, which beat Reims 4-1 on Wednesday to record a seventh straight win and move eight points clear at the top of the French league.

Hopes of a shock win for the side from the Champagne region of France quickly fizzled out when, three minutes later, striker Edinson Cavani scored the first of his two goals with a well-taken lob over goalkeeper Edouard Mendy.

The industrious Cavani then earned a penalty converted by Neymar in the 24th, before profiting from Mendy's handling error to scoop in PSG's third goal just before halftime.

Belgium right back Thomas Meunier scored the fourth from close range in the 55th, after which PSG eased up.

PSG has 24 goals in its seven wins, but remains prone to conceding sloppy goals and lost its opening Champions League game 3-2 at Liverpool last week.

What a turnaround it has been for Lyon, which has hit form after an inconsistent start to the season.

A surprise win at Premier League champion Manchester City in the Champions League last week, followed by a 4-2 home victory against bitter rival Marseille on the weekend, and now a 3-0 win at Caen on Wednesday.

Lyon is second in the league, ahead of Marseille and Lille on goal difference.

Moussa Dembele scored his first goals for Lyon since joining from Scottish champion Celtic on the final day of the summer transfer window.

The French striker latched onto a pass into the penalty area and deftly clipped the ball over the goalkeeper into the bottom left corner in the 17th minute. He acrobatically volleyed in his second goal from close range two minutes later, after midfielder Houssem Aouar's shot was saved.

Striker Martin Terrier made it 3-0 after 35 minutes, rising at the back post to powerfully head in former Manchester United fullback Rafael's cross from the right.

GERMAIN DOES IT AGAIN.

Forward Valere Germain volleyed the winner in the first minute of injury time as Marseille won 3-2 at home over Strasbourg — which twice took the lead.

Strasbourg defender Kenny Lala held off defender Jordan Amavi and dinked the ball over goalkeeper Steve Mandanda in the 28th.

Attacking midfielder Dimitri Payet equalized in the 41st from the penalty spot, after his pass to Florian Thauvin led to the winger being fouled, and just before the break midfielder Morgan Sanson curled Marseille ahead from 20 meters out.

Amavi was shown a straight red card early in the second half for a dangerous high tackle on Lala.

Striker Nuno Da Costa's 89th-minute goal seemed to have earned the Alsace-based side a draw, until Germain grabbed his third of the season — all scored from the 89th onward.

Montpellier is fifth after drawing 2-2 at Caen.

Andy Delort's first league goal for Montpellier saw the striker care little for the unwritten rule about not celebrating goals against your ex-club.

Not so Delort, who shouted exuberantly as he peeled away in unashamed delight in front of his former fans.

Forward Francois Kamano's fifth goal of the season gave 10th-place Bordeaux a 1-0 home win against Lille, while promoted Nimes missed a first-half penalty in a 0-0 home draw with last-place Guingamp.