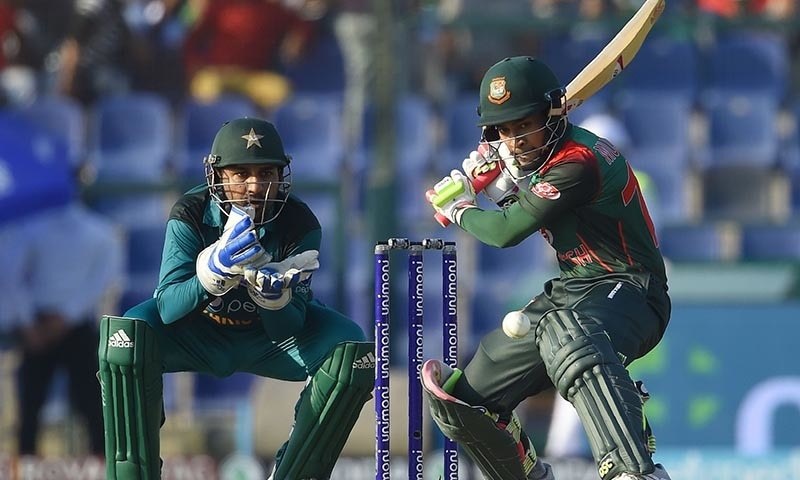 Bangladesh have set a 240-run target for Pakistan to chase in their crucial Asia Cup 2018 Super Four clash at the Sheikh Zayed Stadium in Abu Dhabi.

After Bangladesh won the toss and opted to bat first, Liton Das and Soumya Sarkar opened their innings, whereas Junaid Khan and Shaheen Afridi shared the new ball for Pakistan.

Junaid, playing his first match of the tournament, made almost instant impact as he removed Sarkar for naught in the 3rd over.

Mominul Haq walked in to join Das but his stay at the crease didn't last long as Afridi bowled him out in the very next over — the fourth of the innings.

Junaid tripled Bangladesh's troubles by shattering Das' stumps with a peach of a delivery in the 5th over, at the end of which the score stood 12-3.

With three wickets having tumbled in three straight overs, Mushfiqur Rahim and Mohammad Mithun went on the defensive to plug the leak. After 10 overs, the Tigers were 27-3.

Runs were relatively easier to come by in the next five overs as the Rahim, Mithun pairing mixed singles and doubles with a boundaries every now and then. By the end of 15 overs, Bangladesh were 55-3 and somewhat recovered from the triple setbacks.

Rahim, who had scored a magnificent 144 in the victory of Sri Lanka earlier in the tournament, was growing in confidence, easily dealing with whatever Pakistani spinners hurled at him.

With 20 overs gone, Bangladesh were 83-3, and Pakistan had all but spurned the impact of the three-wicket break earlier in the innings.

Pakistan bowling showed some signs of resurgence between overs 20 and 25 but it did not reaped a wicket. At the halfway mark, the Tigers were 107-3 and certainly back in the game.

The 26th over saw Rahim bring up his half-century as well as his 100 partnership with Mithun.

Hasan Ali was reintroduced into the attack in the 27th over and he should have had his breakthrough when he forced Rahim to nick one to the slip cordon, which unfortunately for him was empty as his skipper had removed the catcher prior to that over.

Junaid was also brought back as Sarfraz fished for a wicket his side badly needed but again absent was the attacking intent as the slip cordon was empty, although it may have also had something to do with Junaid's bowling angle.

The Bangladeshi batters brought up their 150 in the 33rd over bowled by Afridi, who was the third pacer reintroduced into the attack by Sarfraz in search of the elusive breakthrough.

Hasan finally broke the Rahim, Mithun's 144-run partnership in the 34th over when he had the latter playing an ugly hoick, and caught him on his own bowling. Mithun departed having contributed 60 off 84 balls.

New man Imrul Kayes drove Afridi for a four in the 35th over, at the end of which Bangladesh were 163-4. But the southpaw did not last long as Shadab had him trapped in front of the wickets in the 37th over; he made just 9 runs.

The twin wickets dried up the runs for Bangladesh, who were now hoping that the jaded Rahim bats till the end.

At 99, Rahim was on the verge of completing his second ton of the tournament when Afridi had him caught behind in the 42nd over, giving him a heartache to go with his aching legs.

The pace trio of Junaid, Afridi and Hasan were finally bowling up to their reputations as Bangladesh were faultering. By the end of 45 overs, the Tigers were 221-6.

Junaid picked up his third wicket of the day in the 46th over, dismissing Mehidy Hasan Miraz as captain Mashrafe Mortaza walked in. The comeback kid struck again in the 48th over, this time unsettling the stumps of Mahmudullah.

In the 49th over, Mortaza launched Hasan for a six over midwicket. That proved to be the innings; first and only maximum as Bangladesh lost both their remaining wickets in the same over, finishing with 239 all out.