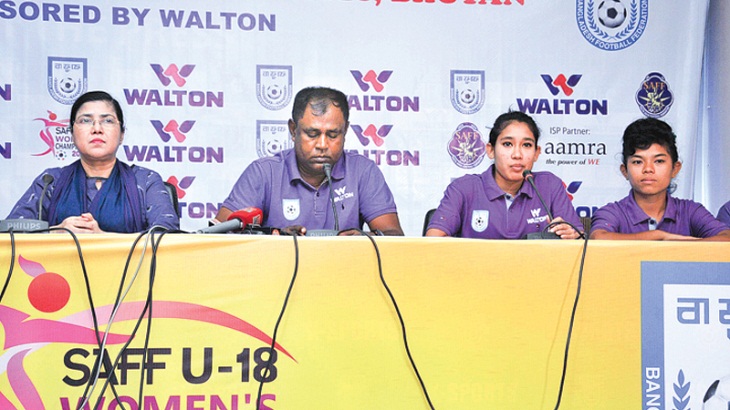 Bangladesh U-18 Women's Football team leave Dhaka for Bhutan on Wednesday to participate in the six-nation South Asian Football Federation (SAFF) Women's Championship beginning on Friday (Sept 28) at the Changlimithang Stadium in Thimphu keeping their bird eyes on the final.

India will play hosts Bhutan in the inaugural match on Friday at 4 pm (local time) while Nepal will encounter Pakistan at 7 pm (local time) at the same venue in the other opening day's fixture.

Bangladesh, which were placed in Group B with Pakistan and Nepal, will play Pakistan on September 30 and face Nepal on October 2. India, the Maldives and Bhutan were put in Group A of the meet.

Two top teams from each of the group will play in the semifinals on October 5 while the final match will be held on October 7.

Besides, comparatively senior players like Krishna Rani Sarkar, Sanjida Khatun, Ratna, Swapna, Mousumi who were excluded from the Bangladesh U-16 team due to over age, were also included in the U-18 team.

Bangladesh team finished runners-up in the SAFF U-15 Women's Championship in Bhutan in last August.