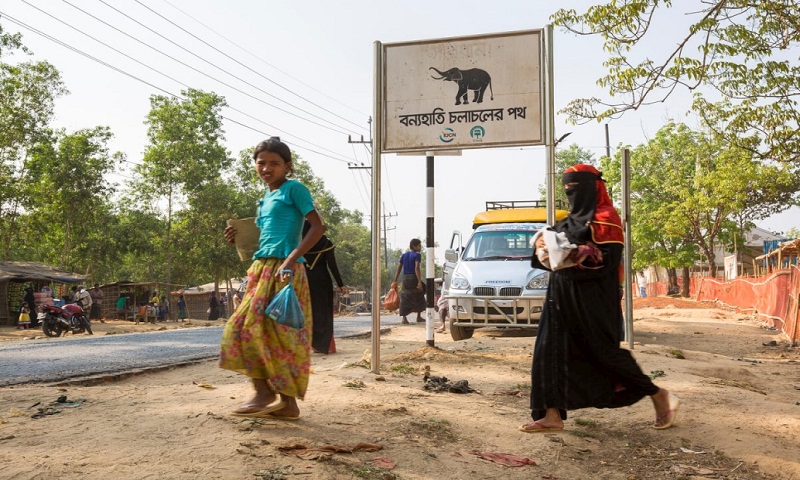 The government wants to continue its efforts with other stakeholders to keep the movement of animals, especially elephants, undisturbed following the significant impacts on wildlife and subsequent human-elephant conflict due to installation of makeshift camps for Rohingyas, officials said.

The makeshift camps have a significant impact on wildlife and food shortages, shrinking habitats and disruptions in breeding grounds are affecting nocturnal, metaturnal and crepuscular and diurnal wildlife.

“This is a special problem. We’re looking into it to make some arrangement so that their (animals, especially elephants) path is not disturbed,” said Environment and Forests Minister Anisul Islam Mahmud.

Rohingya communities are encroaching on elephant’s habitat in the Cox’s Bazar Forest Division and both resident and migratory elephants are facing a continuous shrinkage of their habitat and food supply, according to a status of Asian Elephants in Bangladesh.

To date, 268 resident wild elephants, 93 migratory elephants and 96 captive elephants have been recorded in Bangladesh, the IUCN data shows.

Since the influx in August 2017, coupled with the host community and Rohingyas from past influxes, the crisis-hit population is now almost 1.5 million in Cox’s Bazar, creating a massive pressure on the already dilapidated environment there which still remains significantly underfunded, a recent UN report observed.

With this amount of people, Minister Anisul said, the eco-system is being destroyed following deforestation. “Once you deforest the area, you’re going to have consequential changes in eco system.”

Since the Rohingya refugee influx into Bangladesh last August, there have been at least 13 deaths resulting in from human-elephant incidents in the main Kutupalong-Balukhali refugee settlement, according to UNHCR.

Talking to UNB, Refugee Relief and Repatriation Commissioner (RRRC) Mohammad Abul Kalam said there has been no such incident in recent months giving credit to joint efforts.

He said a programme is going on with the International Union for Conservation of Nature (IUCN) and the UN refugee agency - UNHCR - to reduce incidents involving elephants coming into conflict with Rohingyas living in camps. “We’re working together – IUCN, UNHCR and the Ministry.”

“To protect us, to survive…we need forests, we need animals. We must understand how important this biodiversity is. Elephants are also part of this biodiverse ecosystem and should be respected,” he added.

Minister Anisul at a recent programme in the city said the Rohingya problem is not going to be over in the next few years and expressed worried whether donors will continue supporting Bangladesh for the restoration of environmental balance in the coming days if Rohingyas leave for their homes.

He explained saying there are so many issues around the world and there are so much of demands for support to address those global issues.

Some 4,300 acres of hills and forests were cut down to make temporary shelters for Rohingyas and ensure facilities and cooking fuel for them in Ukhia and Teknaf of Cox’s Bazar threatening the biodiversity of the ecologically critical areas of the country, says a new report of the United Nations.

Some of the key impacts are likely to become irreversible if measures are not taken immediately, the report said.