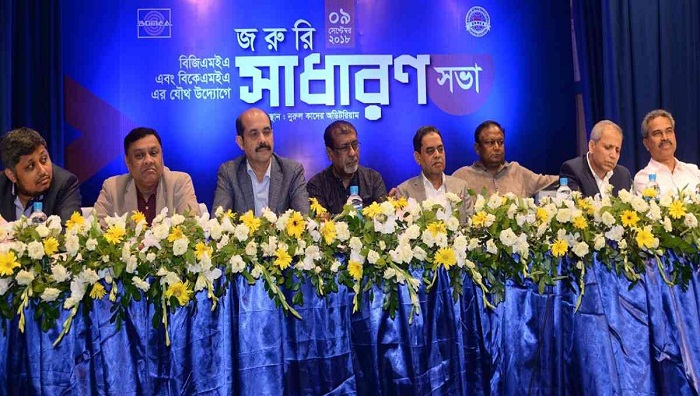 From an emergency general meeting on Sunday, country’s export-oriented readymade garment (RMG) factory owners urged the government to give an ‘exit plan’ for RMG units which want to leave the business for non-viability.

RMG owners also demanded the government to introduce inflation-based yearly wage increase system on permanent basis instead of the existing system of raising wage in every 5-year by forming a commission.

“We want adjustment in the workers’ wage keeping in line with rate of inflation”, said Shafiul Islam Mohiuddin, President of the Federation of Bangladesh Chambers of Commerce and Industries (FBCCI) and a former president of Bangladesh Garment Manufacturers and Exporters Association (BGMEA).

He was addressing the emergency general meeting of the RMG factory owners held at the BGMEA’s Nurul Kader Auditorium in the city under the joint aegis of BGMEA and Bangladesh Knitwear Manufacturers and Exporters Association (BKMEA)—the two main representative bodies in the country’s RMG sector.

“We’ll call for an exit plan for those who want to leave the garment business”, he added.

Most of the speakers severely criticised the civil society members and NGO leaders for their advocacy in favour of garment workers’ wage hike in seminars and TV talk shows.

Some civil society members and NGOs are involved in conspiracy to destroy the country’s garment sector, they alleged.

The FBCCI chief was echoed by other speakers at the meeting held against the backdrop a perception that the government might move to declare the minimum wage as per wage commission’s recommendations. The commission was formed in January this year.

Siddiqur Rahman said that he would pursue the government to accept their demands.

He mentioned that in the wage commission, the BGMEA has proposed the minimum wage to be Tk 6360 while the labour leaders have proposed it at Tk 12020.

He said although BGMEA proposed the minimum wage at Tk 6360, for many factory owners it would be hard to implement it.

Tipu Munshi said the time is not in favour of garment industries as the general election time is nearing and the government feels pressure to announce the new wage for the garment workers.

Atiqul Islam said the factory owners already raised 20 percent wages of the workers at different forms while they have to spend extra money at the government offices at every stage of their business in exporting goods.

“But buyers never want to increase their prices of the goods”, he said.

BGMEA leader Ehsan Fazle Shamim said the organisation should do more to improve efficiency of the workers as two workers gets $175 a month to run a machine in Bangladesh while one worker in Vietnam runs same and gets $160.