I'd do it again, says Mbappe after red card 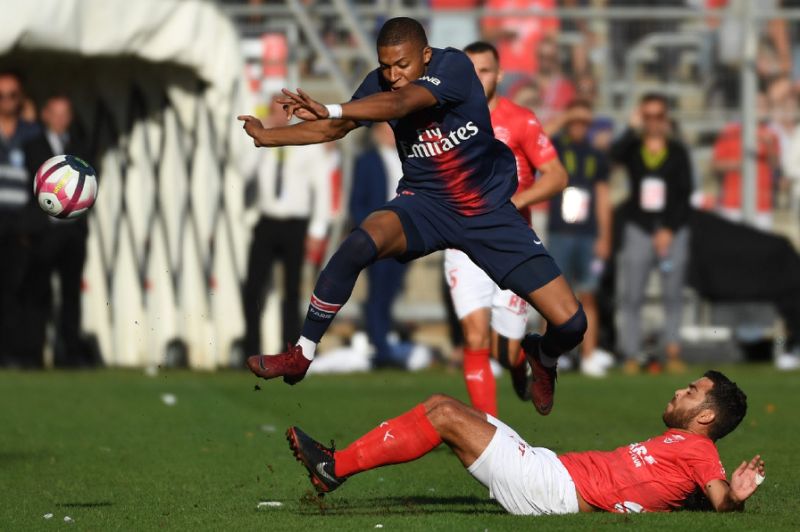 Kylian Mbappe said he had no regrets after his sending-off in Paris Saint-Germain's win at Nimes on Saturday, and claimed he would not hesitate to do the same thing again.

Having earlier scored, the 19-year-old striker was shown a straight red card in stoppage time at the end of PSG's 4-2 victory after shoving over the Nimes midfielder Teji Savanier.

That foul was in retaliation after he had been scythed down by Savanier, and the Nimes player was also sent off for the foul.

"No, no, no," said Mbappe afterwards when asked if he wished he had not responded the way he did.

"If I had to do it again, I would and I would apologise to all the supporters and to everyone.

"But it doesn't matter, I'll go and defend myself before the disciplinary committee."

Mbappe will now be automatically suspended for PSG's next game, a home match against Saint-Etienne on September 14 that precedes a trip to Liverpool in the Champions League.

But the nature of the offence means he could face a lengthier ban from domestic action.

PSG had been 2-0 up at half-time through goals from Neymar and Angel di Maria, the latter direct from a corner, only for Nimes to pull themselves back level in the second half.

It was Mbappe's 77th-minute goal that punctured the home side's hopes, before Edinson Cavani secured the win late on to leave PSG with maximum points after four games of the Ligue 1 season.

Asked if he doubted that PSG would win all three points, Mbappe said: "No, we want to be a great team, and a great team must learn never to doubt itself, even in difficulty. We were in a lot of difficulty today but we come away with the victory."