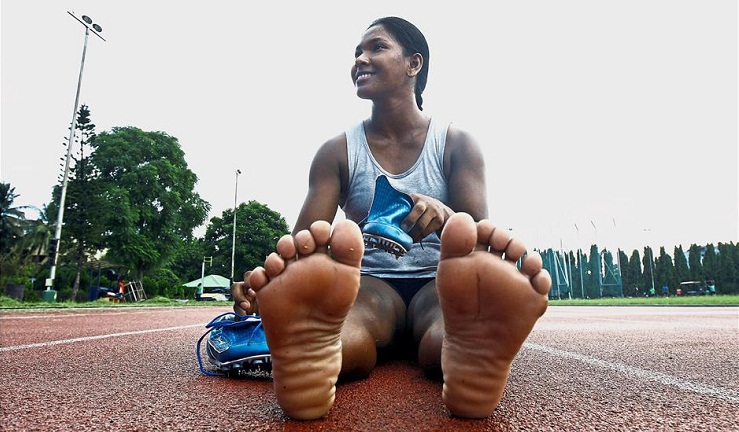 An Indian athlete with six toes on each foot who won gold at the Asian Games is to receive special custom-made shoes after a company boss was touched to hear of the pain she suffered while running in the heptathlon.

The 21-year-old Swapna Barman spoke after winning the regional Olympics title on Thursday of how her rare deformity caused agony with each step in her final event, the 800m.

A government-run enterprise in the southern city of Chennai has come forward to help Barman get customised shoes.

"After she won the gold I saw on TV that she had a deformity in her feet," said Sudhanshu Mani, general manager of Integral Coach Factory, a railway coach manufacturer that also funds training for athletes.

"We are in touch with Nike. We are waiting for her to come back so that we can get her size and get the customised shoes made for her," he said, explaining that his company would bear the cost.

Barman comes from an impoverished family in the West Bengal city of Jalpaiguri and her plight has touched the nation.

Her rickshaw-puller father has been bedridden for several years since suffering a stroke. Her mother Basana Devi left her job as a tea garden worker to look after her husband.

They have relied on the earnings of their son, a stone mason.

A video of the family watching Barman's gold-winning feat on TV has become a social media sensation in India.

The weeping mother can be seen rushing to a temple outside to thank a deity for Barman's fairytale finish.

Basana Devi told local media that surgery to fix her daughter's feet had been impossible because of the cost.

"How could I get that done? I myself was born with six toes on one foot. It is because of me that Swapna is this way.

"I managed. We thought she would too."

The West Bengal government has promised a reward of one million rupees ($14,110) and a government job for Barman.

Barman shot to prominence last year by winning the Asian Championships in India before suffering a string of injuries that kept her out for nearly a year.

But she came back in time to finish second in India's Asian Games qualifiers.

In Jakarta she won her specialist high jump, the shot put and javelin, to record a personal best score of 6,026. Besides her shoe woes, Barman also had to contend with a toothache and ran with a taped jaw.