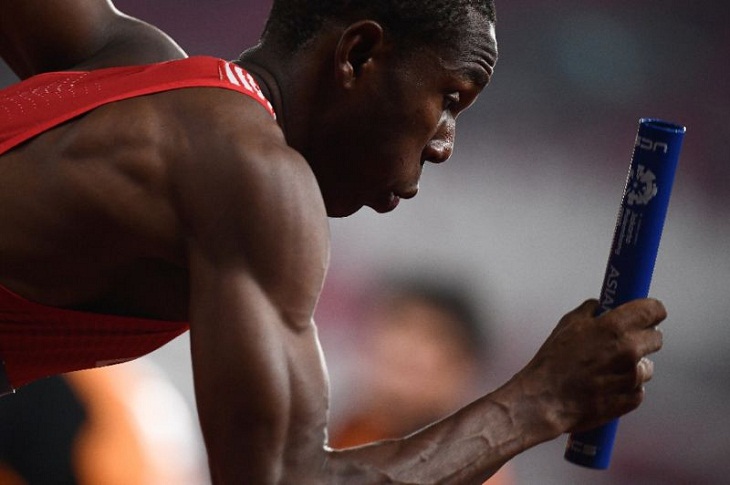 The tiny Gulf kingdom of Bahrain finished joint-top of the Asian Games athletics table with 12 golds -- but not everyone is rushing to congratulate them.

That is because not a single track win at Asia's regional Olympics would have been achieved without "naturalised" athletes who were born in Africa.

Bahrain's policy of scouting and offering nationality to talented foreign athletes -- which is entirely legal -- has stoked controversy for years, but the results have been particularly stark at this Games in Indonesia.

All 10 individual athletics gold won by Bahrain were earned by runners born on the African continent -- Nigeria, Ethiopia, Kenya and Morocco.

Of the two gold-winning relays teams, all but two athletes were also of African origin.

For the athletes themselves, the appeal of switching allegiance is obvious -- financial security is key, but tales of poor treatment or lack of opportunities in their countries of birth are commonplace.

"Bahrain was good pay, a good treatment," explained 1,500m and 5,000m gold winner Kalkidan Befkadu, 27, who says she moved to the Gulf nation six years ago.

"There's so many strong athletes in Ethiopia so it's a challenge to compete, so that's also why I changed."

"Yes I'm pleased with my decision," she told AFP with a beaming smile, minutes after winning her second gold of the meet.

But for athletes from other nations who ended up with silver, bronze or empty-handed after falling behind African-born competitors, there is a sense the competition has been distorted.

India's Dutee Chand -- who had to fight a legal battle to even compete in Jakarta due to her high testosterone levels -- twice missed out on gold, in the 100m and 200m, to Nigerian-born Edidiong Odiong.

Chand and her fellow athletes have not spoken out on the issue, but Indian newspapers were quick to jump on the controversy.

The Indian Express this week listed the athletes who "had to suffer at the hands of the 'Out of Africa' contingent". The Hindu referred to two competitors from Qatar -- which employs similar practices -- as "two Africans in West Asian garb".

Rules on naturalising athletes vary between countries. But Bahrain officials have defended their recruiting methods, citing the vast resources they pour into athletes' training.

"It is not nationality that brings us medals, but the training and technical and administrative effort," Bader Nasser, manager of the Bahrain Athletics Federation, told AFP. "Naturalisation is a legitimate right and we are committed to the laws."

Nasser also said Bahrain does not import athletes who are already established, claiming his coaches are "bringing them young and training them to reach world championships".

But some of those who won gold in Jakarta had already represented their countries of birth, and switched allegiance as late as their mid-twenties.

"What is the largest (athletics) country in the world? The US right? A continent is naturalising for sports, and Bahrain is only a very small percentage compared to it."

But now that Bahrain has broken the monopoly of its own continental superpower -- China last failed to win the athletics table at the Asian Games outright in 1982 -- it may need to prepare for greater scrutiny.

While not everyone is happy, most athletes speaking to AFP in Jakarta were quick to praise the high performances of the athletes representing Bahrain.

"Bahrain is very, very powerful in the Asian Games now. I'm inspired by their team and I want to get better like them."