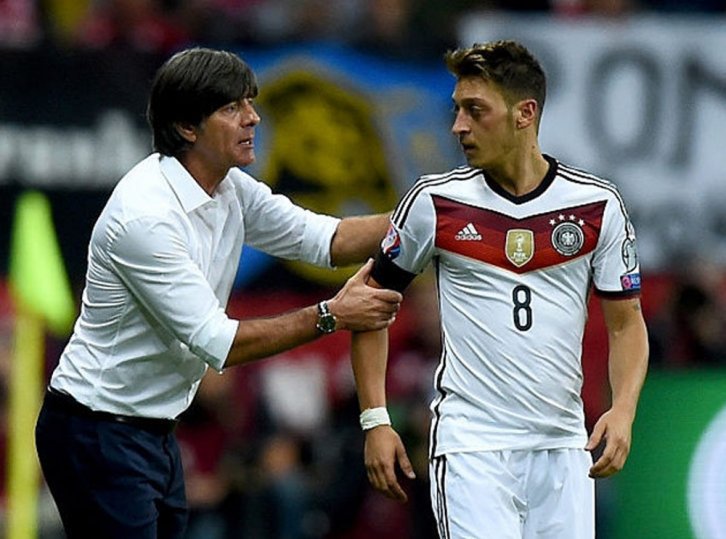 Joachim Loew has rejected Mesut Ozil's accusations of racism within the German FA (DFB) as the head coach gave his analysis of Germany's World Cup debacle on Wednesday.

"Mesut made allegations of racism, but I can clearly say that in the DFB, there have never been racist comments," Loew said while announcing his squad to face world champions France in Munich on September 6, then Peru three days later.

"The players with an immigration background have always enjoyed playing for us and nothing has changed," added Loew who has been head coach since 2006.

Arsenal midfielder Ozil retired from international football on July 22 with a stinging three-page statement, in which he directly accused DFB president Reinhard Grindel of racism.

This is the first time Loew has commented on the Ozil saga.

"His advisor called me to inform me that Mesut would issue the third part of his statement," added Loew.

"The player himself did not call me, which normally players have done in the past.

"Mesut has still not called and for the last two weeks I have unsuccessfully tried to reach him.

"I am sure there will be a chance for a personal conversation in the future.

"He has chosen this path - I have to accept that."

Ozil and Ilkay Gundogan, who were both born in Germany to Turkish parents, sparked a political storm on the eve of the World Cup by meeting Turkey president Recep Tayyip Erdogan.

When Erdogan's office put out pictures of the meeting, the pair's loyalty to Germany was hotly questioned, sparking fierce debate about integration, and they were attacked by German far-right politicians.

Ozil walked away from the German set up after the World Cup, complaining of facing "racism and disrespect" and specifically took aim at Grindel.

"In the eyes of Grindel and his supporters, I am German when we win, but I am an immigrant when we lose," Ozil wrote damningly.

The axe has also fallen on Sami Khedira, 31, who was part of the team which won the 2014 World Cup.

The Juventus midfielder is the biggest name casualty in the new squad, which included Gundogan, as well as his Manchester City team-mate Leroy Sane, who was dropped for the World Cup.

Loew says 'the biggest mistake' he made in Russia was to assume Germany could reach the knock-out stages by playing possession football.

"That was almost arrogant. I wanted to take our game to the limit and perfect it," admitted the 58-year-old.

"I ended up taking too many risks and after the first game (a 1-0 defeat to Mexico) we had our backs to the wall."

In May, Loew signed a four-year deal to take him through to the next World Cup, but admits Germany's woeful performance in Russia puts him under huge pressure to turn things around -- starting against world champions France.

"We are all being specially observed and put under pressure, I am aware of that," said Loew.

"However, I am still convinced of our class and quality. The World Cup squad was very, very good, but we did not perform."