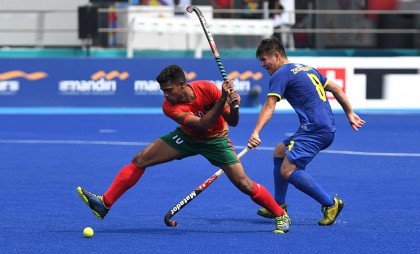 Bangladesh Hokey team have achieved their initial target of finishing 6th in the 12-team 18th Asian Games Men’s Hockey beating Thailand by 3-1 goals in their 4th Pool B match at the Gelora Bung Karno (GBK) Hockey field in Jakarta on Sunday.

After the 3rd win in their four matches, Bangladesh not only maintained their all-win record against Thailand, but also got an opportunity to play directly in the final round of the Asian Games and Asia Cup Hockey from the next time avoiding qualifying round.

With the day’s feat, Bangladesh achieved their ultimate target beating all the three low rating teams -- Oman, Thailand and Kazakhstan.

In the remaining Pool B match, Bangladesh will play top-seed Pakistan on Tuesday (Aug 28) at 5 pm Bangladesh time.

Besides, Bangladesh (world ranked 31), which never lost any match against world number 47 Thailand in competitive hockey, have another chance to battle for the 5th slot in the Asiad Hockey, where they will likely to play Japan in the classification match.

After a barren result in first two quarters of the day’s match, Mohammad Ashraful Islam, who missed the last match against Malaysia due to injury, struck twice for Bangladesh in the 35th and 41st minutes of the 3rd quarter, both from penalty corners (2-0).

In the 4th last and final quarter, Borirak Harapan scored the first goal for Thailand in the meet to reduce the margin in the 47th minute (2-1) while Mohammad Milon Hossain sealed the fate of the match scoring one more goal in the 55th minute (3-1).

In the day’s other matches, Oman beat Kazakhstan 4-0 in Pool B while Japan outplayed Hong Kong 13-0 and Sri Lanka beat hosts Indonesia 3-1 in Pool A outings.

On completion of four Pool B matches, Bangladesh were in the 3rd slot in the six-team group securing nine points with three wins and one defeat while their main opponent Oman were in the 4th slot bagging six points from four outings.

Pakistan and Malaysia dominated the Group B securing full nine points from three matches with huge goal difference were scheduled meet each other on Sunday evening to decide the group crown.

Bangladesh, which kept their bird eyes in the 5th place of the ongoing Asiad, achieved their target beating arch-rival Oman by 2-1 goals and outplaying Kazakhstan by 6-1 goals, despite a humiliating 0-7 goals defeat against stronger Malaysia in the 3rd match.