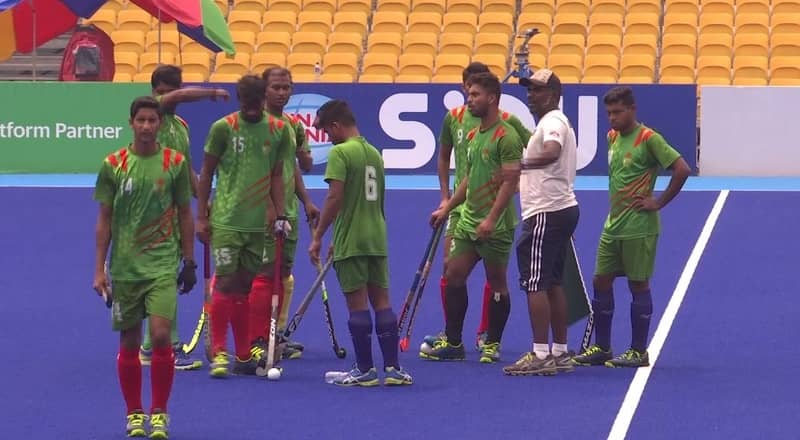 Bangladesh to play Thailand in their 4th Pool B match of the 18th Asian Games Men’s Hockey at the Gelora Bung Karno (GBK) Hockey field in Indonesia on Sunday to assure at-least 6th place in the 12-nation continental meet.

The match will kick-off at 3 pm (Bangladesh time).

Bangladesh (World ranked 31), which never lost any match against World number 47 Thailand in competitive hockey, have a good chance to battle for the 5th slot in the Asiad Hockey beating Thailand.

Moreover, a win against Thailand, will open the golden opportunity for Bangladesh to play directly in the final round of the Asia Cup and Asian Games from next time, without playing the qualifying round.

In the other Pool B matches on Sunday, Oman will face Kazakhstan at 1 pm while group leader Pakistan will encounter their nearest rival Malaysia 7 pm Bangladesh time.

On completion of three Pool B matches, Bangladesh were in the 3rd slot in the six-team group securing six points with two wins and one defeat while Pakistan and Malaysia dominated the group securing full nine points.

Oman were in the 4th place collecting three points while Thailand and Kazakhstan yet to open their account despite playing three matches each.

In Pool A, India and South Korea leading group securing full nine points from three matches, Japan and Sri Lanka followed them with six and three points respectively. Indonesia and Hong Kong yet to open the account playing three matches each.

Bangladesh, which kept their bird eyes in the 5th place of the ongoing Asiad, are now in the right way to achieve their target beating arch-rival Oman by 2-1 goals and outplaying Kazakhstan by 6-1 goals, despite of a humiliating 0-7 goals defeat against stronger Malaysia in the 3rd match on Friday.

In the remaining Pool B match, Bangladesh will play top seed Pakistan on Tuesday (Aug 28) at 5 pm (Bangladesh time).