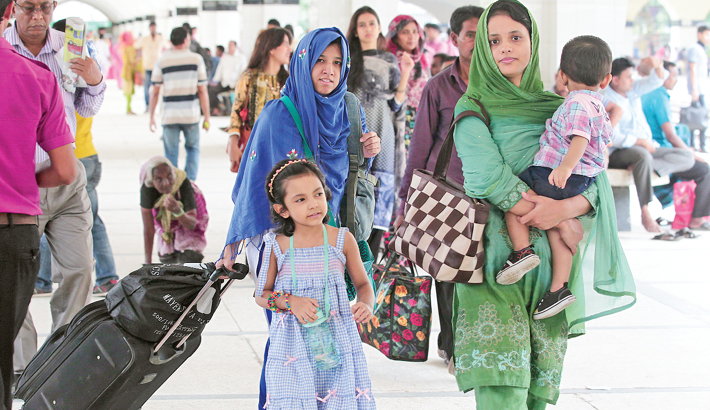 Ahead of their first working day after the Eid vacation, holidaymakers started returning to the capital on Saturday after celebrating the Eid-ul-Azha with their families in their hometowns, UNB reports.

Moderate crowds of people coming back to the city were found at Railway stations, bus and launch terminals, but the pressure of the returnees is still low.

Alamgir Hossain, Joint Director at Naval Traffic, said 70 launches reached Sadarghat Launch terminal from 23 routes from around 7am to 11am today.

He said the number of returning passengers is not that much high yet, but it will increase on Sunday.

Meanwhile, trains were running about half an hour behind their schedules on average, causing delay to the departure of the outgoing ones, said Mizanur Rahman, a sub-inspector at Kamalapur Railway Station.

Shahidul Islam, a banker who returned from Kushtia by train, told UNB that he along with his family members had to return today (Saturday) as his office and the schools of his kids reopen on Sunday.

“There was a less crowd. So, we didn’t have to suffer much except the delayed train,” he added.

Meanwhile, ferry services on Shimulia-Kathalbari route were disrupted for two hours from around 4am to 6am due to poor navigability in the Padma River causing immense sufferings to passengers.

The dredging works are going on to solve the navigability problem and soon the ferry services will get back to normalcy, he added.

He also said 87 launches and 400 speedboats are transporting passengers on this route.

Farhana Dolly, a resident of Shahjahanpur who was returning from Feni, said, it took lesser time to reach Dhaka this time as the highway was relatively free of traffic.

As the festive mood of Eid vacation has not lost its charm yet, those who did not leave the city for Eid celebrations enjoyed the city free from traffic jams, noise and crowd.

“This is the reason I along with my friends decided to roam around the city to enjoy crowd-free and traffic-free Dhaka experience,” he added.

This year, along with the three-day Eid holidays, most of the holiday makers got additional two days off -- Friday and Saturday.

Dhaka is expected to get back to its usual bustle on Sunday when people will be returning to the capital in their thousands from Saturday night.