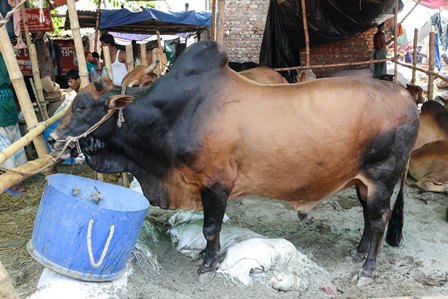 The sales of sacrificial animals at different markets in the capital gained momentum on Monday, two days ahead of Eid-ul-Azha, with a slight downward trend in prices than that of last two days.

Huge buyers started thronging the cattle markets since morning, and the evening was even greater crowds.

Lessees and traders said the cattle were entering the capital from different parts of the country with hundreds of trucks carrying cattle stranded in tailbacks at different ferry ghats.

The prices might be decreased further if the cattle supply is increased, they said.

Rakib Imran, one of the lessees of Gabtoli cattle market, said the supply of sacrificial animals is sufficient. “It’ll increase further later tonight (Monday night) as many cattle-laden trucks are stuck at different ferry ghats. The prices of animals are quite normal today and it may come down further when the supply will increase,” he said.

He also expects increased buyers on Monday night and Tuesday as Monday was the last working day before Eid-ul-Azha which will be celebrated in the country on Wednesday.

A UNB correspondent found the cattle market on 300-foot Road adjacent to Bashundhara Residential area very crowded as it is very spacious compared to other cattle markets in the city.

One of the lessees of the cattle market, Aslam Uddin, said the cattle market has huge space. “So, people are coming here in huge numbers to have a good environment. But the sales of cattle are somewhat today (Monday). The sales will be increased tomorrow (Tuesday).”

At the cattle market in old Dhaka’s Nayabazar, another UNB correspondent found cattle were still coming from different parts of the country through different channels. Small-sized cows are being sold at higher prices due to their higher demand among buyers.

Md Marfat Ali, leaseholder of Bhatara Sayeed Nagar cattle market, said the prices of cattle heads were relatively reasonable on Monday as there was an adequate supply.

He said small-sized cattle are selling at Tk 40,000-70,000 each while medium-sized ones at Tk 1-1.75 lakh each and large-sized ones Tk 3-10 lakh each in his market. “Customers are still observing the market trend expecting a further fall in prices,” he added.

Ahsan Habib, a buyer in the city’s Meradiya cattle market, said there was adequate supply of animals. “Prices are not so high compared to yesterday’s (Sunday) as I heard it was slightly higher yesterday.”

Aminul Islam, a cattle trader who came from Kushtia, said they were getting fair prices of their cattle heads this year due to poor presence of Indian cattle.