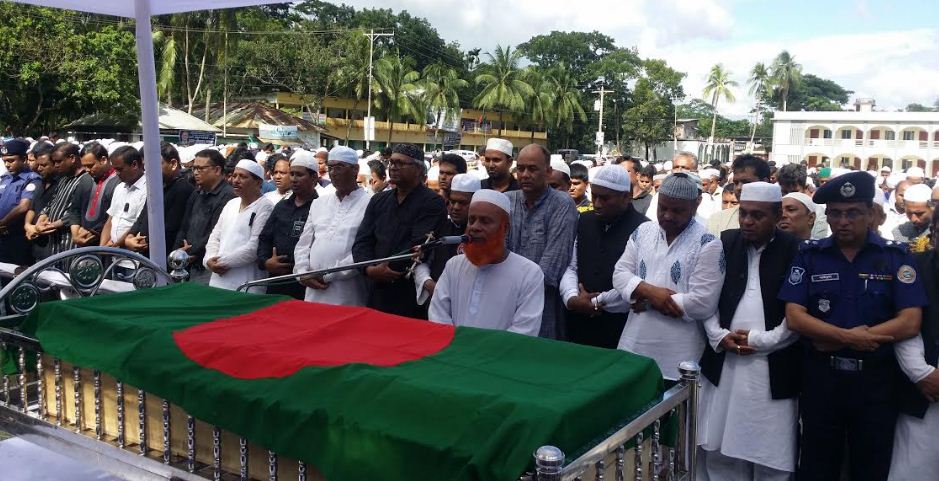 People from all walks of life paid their last respects to Samakal Editor Golam Sarwar, who passed away at a Singapore hospital on Monday night, in Barishal on Wednesday.

The body of the renowned journalist was taken to Banaripara from Dhaka by a helicopter around 2:30 pm.

Later, he was given a guard of honour at Banaripara Government Model Union Institution ground.

After the janaza, people from all strata of life paid their tributes to the memory of the renowned journalist.

Later, his body was flown back to Dhaka.

It will be taken to his workplace Samakal office in the capital around 9am on Thursday where his colleagues will pay last respects to their late editor. His 2nd janaza will be held at the field of Bangladesh University of Textiles adjacent to the Samakal office.

Later, the body will be brought to the Central Shaheed Minar on the Dhaka University campus. It will be kept there for one-and-a-half hours from 11am to enable people of all walks of life to pay homage to Sarwar under the supervision of Sammilita Sangskritik Jote.

From the Shaheed Minar, Sarwar’s body will be taken to the Jatiya Press Club where journalists will pay their tributes to him before his last janaza there after Zohr prayers.

Finally, he will be buried at Mirpur Martyred Intellectuals’ Graveyard after Asr prayers on Thursday.

Sarwar, also the president of Editors’ Council, breathed his last around 9:25 pm (BST) on Monday while undergoing treatment at Singapore General Hospital for various diseases at the age of 75.

Meanwhile, a condolence book was opened at the Samakal office on Tuesday morning.