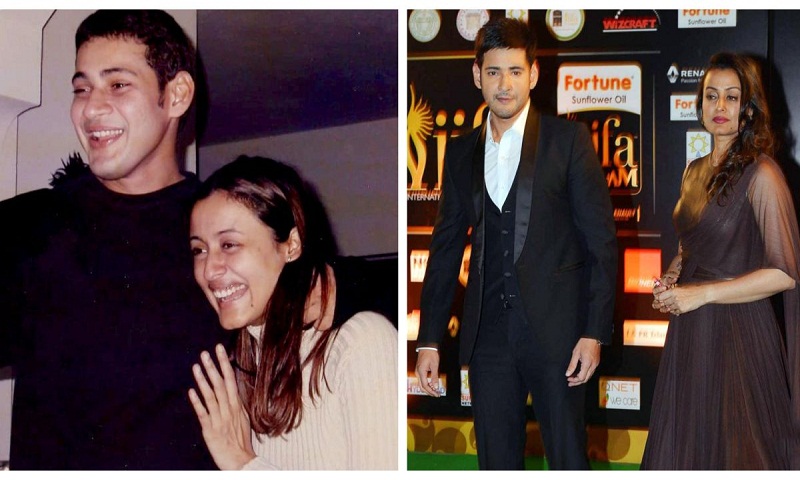 Mahesh Babu, the superstar of Telugu films, is loved and adored by an enormous number of fans. He started off his acting career as a child artiste in Needa (1979). Later on, he made his mark in the industry with his debut film Rajakumarudu (1999). The 43-year-old actor has a wonderful repute on screen as well as off-screen which makes him one of the most followed celebrities in Tollywood.

Though a lot about celebrities are at disposal for public consumption, he is among those who have always been reserved about their personal lives. Other than in films, where Mahesh Babu has brought forth numerous stories to look up to, his real life love story is also something to admire. Once voted as most ‘Most Desirable Man In India‘, the actor has always been a one-woman man.

Mahesh Babu and former Miss India Namrata Shirodkar tied the knot in 2005 and have completed 13 years of companionship. The couple has two children- Gautham Krishna and Sitara.

The actors first met in 1999, during the muhurat of Namrata’s third south Indian film, Vamsi. Namrata, who is four years older to Mahesh and had already made her debut in Bollywood alongside Salman Khan, was then linked with filmmaker Mahesh Manjrekar. About Mahesh and Namrata, it is said to be love at first but both of them were never vocal about their feelings in the beginning.

Since Mahesh wasn’t well known in Bollywood and Namrata was new in Tollywood, their relationship stayed away from the limelight. After dating each other for 5 years they levelled up their relationship and decided to get married. Mahesh then broke the news to his parents, who were initially not so glad to learn about it. However, Mahesh’s sister Manjula intervened which led them to get hitched in 2005.

Namarata bid goodbye to her acting career since it was always clear that Mahesh did not want a working wife. Their marriage was a private affair with only close family and friends present there to attend it.

In 2006 which was a rough patch for the couple, they were blessed with their first child, a boy whom they named Gautham. Reportedly, Namrata even moved out of Mahesh’s house in Hyderabad with his son and settled in Mumbai for some time that year. Talking about the rift, Namrata once said in an interview, “Three years post marriage was difficult for Mahesh and me. He was on a long career break, I lost my parents, he lost his granny. Plus, he was in this whole dilemma of what movie to sign next. But that period made us stronger as a couple, and as individuals. Our foundation today is more solid, we became one strong nuclear unit. I look back at all of it as a blessing.”

Mahesh and Naramata’s relationship has been going strong ever since. They welcomed their second child, Sitara in 2012. Namrata is credited a lot for her husband’s success. Like it is said ‘Behind every successful man there is a woman’,  Mahesh’s love of life has been the one behind his growth throughout. From handling his endorsement portfolio to influencing his national level brand endorsement she has done it all.

While Mahesh Babu is regarded as the superstar of Tollywood, Namrata is known as the first lady of the industry and together they have been ruling it.