“Nothing can justify” attacks on protesters: US embassy 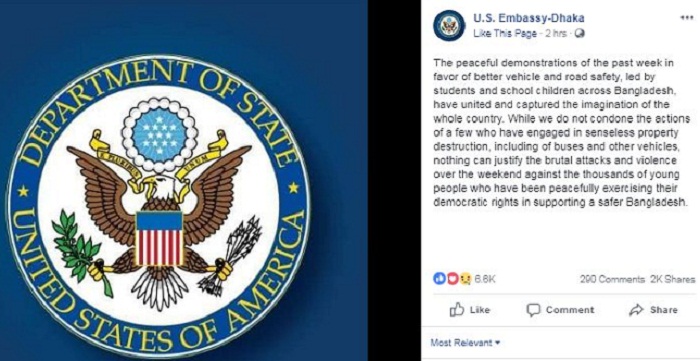 The US Embassy in Dhaka on Sunday said “nothing can justify the brutal attacks and violence” over the weekend against the thousands of young people who have been peacefully exercising their democratic rights in supporting a safer Bangladesh.

The Embassy, in a Facebook post, also said they also do not condone the actions of a few who have engaged in senseless property destruction, including of buses and other vehicles.

The peaceful demonstrations of the past week in favor of better vehicle and road safety, led by students and school children across Bangladesh, have united and captured the imagination of the whole country, it said.

Students of Dhaka University, Dhaka Medical College and Hospital and Bangladesh University of Science of Technology (Buet) started gathering at the intersection around 11 am and blocked the road, disrupting vehicular movement.

Six photojournalists including one for internationally renowned news agency the Associated Press (AP) have been injured in an alleged attack by ruling party student front Bangladesh Chhatra League in different parts of the city on Sunday.

The injured were identified as AM Ahad of AP,  Zawad of Janakantha, Palash of Banik Barta, Rimon of US based Zuma Press, freelancer Rahat and Enamul Hasan, a photography student of Pathsala South Asian Media institute.

Taking position at the Science Lab intersection around noon, students started controlling the traffic for the eighth consecutive day as part of their protest.