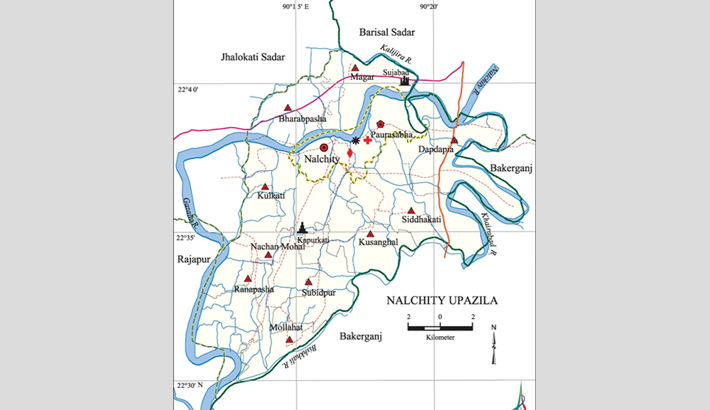 Administration Nalchity Thana was formed in 1924 and it was turned into an upazila in 1983.

Historical events 19 Muslims were killed in an encounter with the British army in a mosque compound at village Kulkati village in 1927. On 13 May 1971 the Pak army shot 13 persons of this upazila dead. On 30 June at mid night the freedom fighters raided the Nalchity Police Station in which Muktijoddha Yunus was killed. Nalchity upazila was liberated on 8 December.’

Marks of the War of Liberation Mass killing site 2.

Hats, bazars and fairs Hats and bazars are 11, fairs 3.

Sources of drinking water ‘Tube-well 87.38 percent, pond 8.46 percent, tap 0.32 percent and others 3.84 percent. The presence of arsenic has been detected in shallow tube-well water of the upazila.

Natural disasters Many people were victims of the floods of 1786 and cyclones and tidal bores of 1822, 1909 and 1970. These natural disasters also caused heavy damages to settlements, livestock and crops of the upazila.