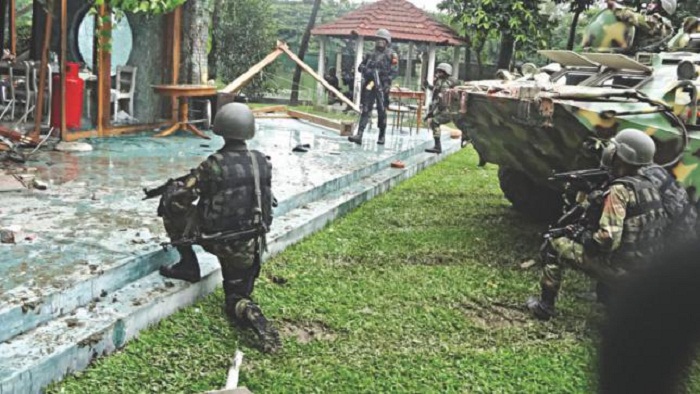 Eight militants have been charged with the deadly militant attack on Holey Artisan Bakery in Gulshan diplomatic zone of the capital.

The Counter Terrorism and Transnational Crime (CTTC) submitted the charge sheet on Monday, nearly two years after the horrendous incident.

The charge sheet was submitted to the Chief Metropolitan Magistrate Court under the Anti-Terrorism Act 2009, CTTC chief Monirul Islam said.

Two of the accused – Ripon and Khaled – were still at large. The six others were behind bars. They already gave confessions under section 164.

The name of Professor Hasnat Karim, a former teacher of the North South University, has been dropped from the charge as his suspected links with militancy could not be proved during the probe.

At a press briefing, he attributed a delay in the submission of the probe report to complexities in obtaining information as those who were involved in the attack were killed on the spot.

A total of 193 persons have been made prosecution witnesses and over 50 pieces of evidences included in the charge sheet, said Mohibul Haque Khan, deputy commissioner of the CTTC.

During the investigation, the CTTC found the direct involvement of fugitives Ripon and Khaled in the attack.

A total of 21 people were identified who were involved in the incident – 13 of them already died.

The charge has been pressed against the eight based on 75 pieces of evidence and 211 witnesses.

However, investigators did not find any IS links with the attack. Some homegrown militants took part in the attack to draw the attention from the international militant group.

They have identified a total of 22 suicide squad members as attackers of the luxury café.

On July 1, 2016 a group of militants attacked the café, killing 20 people, mostly foreigners. A commando operation launched to end the hostage crisis killed the militants.

After the attack, law enforcers swung into action against militants, which left at least 77 suspected militants dead.

Thirteen deceased militants, including Tamim Chowdhury, Nurul Islam Marjan and Sarwar Jahan, who were masterminds of the horrific attack were also accused.