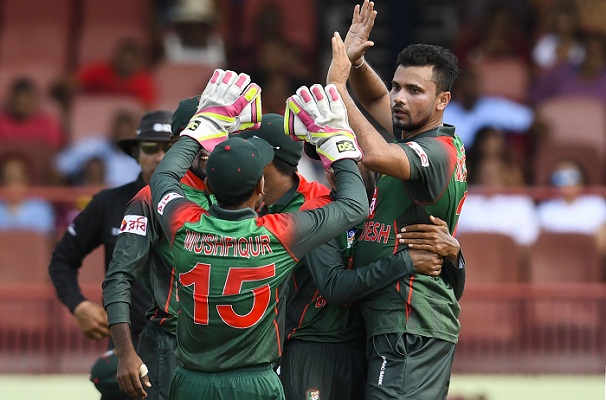 Bangladesh set a competitive total of 279 for four. Chasing 280 runs for victory at Guyana National Stadium, Caribbean side fallen short and manage to score 231 for 9 in the stipulated fifty over.

Earlier, Bangladesh batted first, Tamim made an unbeaten 130, the highest by a Bangladeshi in ODI's against the West Indies, while Shakib hit 97.

Tamim Iqbal declered man of the match for his unbeaten 130-run innings.

The pair's second-wicket partnership of 207 took Bangladesh to respectable score where Mushfiqur Rahim’s 30 off 11 stormy innings speeded up score board.

Mushfiqur Rahim’s batting suggested that Bangladesh should have reached a total closer to 320 runs had there been a much more positive intent throughout the innings.

Mushfiqur, who came to the crease when Sabbir Rahman was erroneously given out stumped off leg-spinner Devendra Bishoo by umpire Joel Wilson, made a significant difference to his side's innings in the final overs.

His late assault contributed to 43 off the last two overs - the most productive ever for Bangladesh in their ODI history - off the bowling of Jason Holder and Andre Russell.