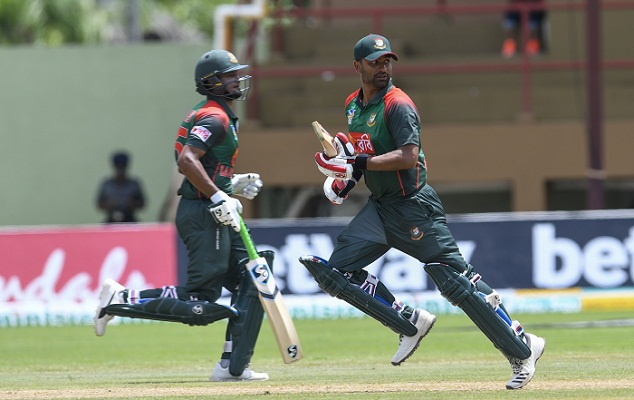 A record double-century partnership between Tamim Iqbal and Shakib al Hasan lifted Bangladesh to a competitive total of 279 for four on Sunday in the opening ODI against the West Indies.

Bangladesh batted first at the Guyana National Stadium and Tamim made an unbeaten 130, the highest by a Bangladeshi in ODI's against the West Indies, while Shakib hit 97.

The pair's second-wicket partnership of 207 represented an almost complete transformation from Bangladesh's performance in the two preceding Tests as the tourists were steamrolled by the home bowling in Antigua and Jamaica.

Yet, while they found the less challenging circumstances of ODI cricket more to their liking, Bangladesh may be disappointed that the pair of senior batsmen did not accelerate their scoring earlier.

A late flourish inspired by Mushfiqur Rahim suggested that Bangladesh should have reached a total closer to 320 runs had there been a much more positive intent throughout the innings.

Mushfiqur, who came to the crease when Sabbir Rahman was erroneously given out stumped off leg-spinner Devendra Bishoo by umpire Joel Wilson, belted 30 off just 11 deliveries and made a significant difference to his side's innings in the final overs.

His late assault contributed to 43 off the last two overs - the most productive ever for Bangladesh in their ODI history - off the bowling of Jason Holder and Andre Russell.

For Holder it represented a turnaround from earlier in the morning where, under heavily-overcast skies and the threat of rain, he removed opening batsman Anamul Haque for a duck in his opening over after Bangladesh captain Mashrafe Mortaza chose to bat first.

Rain eventually interrupted play for half-hour. When the action resumed, Tamim found a resolute partner in Shakib as they set about the task of preventing the sort of batting capitulations that were repeatedly evident in the Test matches.

As well as they played, their cause was assisted by sloppy West Indies catching. Tamim was missed on 17 and 20 while Shakib was let off on 15 and 85.

The pair made the home side pay, but their apparent preoccupation with getting to individual hundreds resulted in a slackening of the pace of scoring at a vital stage of the innings.

Shakib's luck eventually ran out when three runs short of the landmark as Shimron Hetmyer, one of the culprits in the field earlier, made amends with a running catch off the midwicket boundary to give Bishoo his first wicket.

The partnership was the highest for any wicket in ODI's at Providence.

If the leg-spinner was lucky to add the scalp of Sabbir, it turned out to be a blessing in disguise for Bangladesh, as Mushfiqur launched into the bowling almost immediately while also stirring Tamim into life.

He struck consecutive sixes off Russell in the last over, although it could not change the fact that his innings - 130 not out off 160 balls with ten fours and three sixes - was the slowest-ever hundred in ODI's by a Bangladeshi.

It was not a welcome return to ODI cricket for Russell after an absence of almost three years as his ten overs cost 62 runs, the most expensive of the six bowlers used.